Innovation on Tap #7: A Model for Innovation and Community - Lin-Manuel Miranda and "Hamilton" 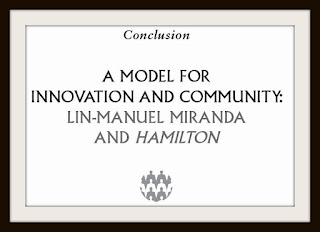 This is the seventh excerpt from Innovation on Tap: Stories of Entrepreneurship From the Cotton Gin to Broadway's "Hamilton" © Eric B. Schultz, available on Amazon, Barnes & Noble, and in quantity from Baker & Taylor or Greenleaf Book Group at 800-932-5420.

Author's note: The final chapter of “Innovation on Tap” is the story of the innovation community that came together around Lin-Manuel Miranda to create “Hamilton.”

Hamilton’s opening night on Broadway was a sensation. But then—after the reviews were clipped and the parties over—the show had to be repeated. Night after night. Dance after dance. Rap after rap. Even when performers and musicians were tired, bored, or not feeling a hundred percent. And the stakes were high, because each performance brought a new audience with overflowing expectations about the show’s brilliance.

Delivering innovation can resemble an assembly line, the reliable yet inspired delivery of an experience that can feel at odds with the highly creative process that precedes it. Success at this stage involves excellence in organization—building habits and consistent process, obsessing about quality, and inspiring people to do the same thing virtually the same way, day after day. It has become a recognized theme in today’s entrepreneurial world, the idea that delivering a product to scale is every bit as important as conceiving and launching that product. It sometimes explains why dazzling inventors fail to become successful entrepreneurs. 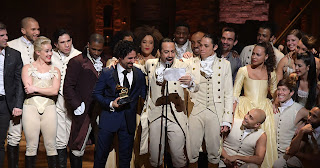 Miranda views performance as a craft that requires focused attention. It is not unlike the way McDonald’s feels about every single meal it serves, or Amazon about each order it fulfills. When asked during the show’s first year what he worried about most, it was clear that Miranda’s role as a creative disrupter had shifted. “The most important thing for me,” the composer said, “is meeting those expectations every night.” Costar Leslie Odom Jr., the show’s original Aaron Burr, says, “I want to know that I’m gonna knock ’em dead every night . . . When you came on Wednesday, you didn’t care that we were great on Tuesday . . . You want to see your Wednesday night show as good as we did it for the president and Oprah and Beyoncé and Jay Z.”

This attention to performance is perhaps best summed up by Chris Jackson, who played George Washington in the original Broadway musical. When Jackson addressed the prayer circle every night before the show, he said to his fellow performers something like, “Let’s agree that for the next two and a half hours, this is the most important thing we’ll do in our lives.” For a member of the audience who might have waited years for a ticket and whose expectations could not be any higher, this commitment is the way a community of entrepreneurs ultimately translates a decade of innovation and unrelenting work into an evening of unsurpassed delight.

From Eli Whitney and his cotton gin to the Broadway smash, Hamilton, their stories capture the essential themes of entrepreneurship, highlight the rules for success, and celebrate the expansive sweep of innovations that have transformed our world.