“Innovation on Tap" # 1: Charles "Buddy" Bolden: The Sound of Innovation 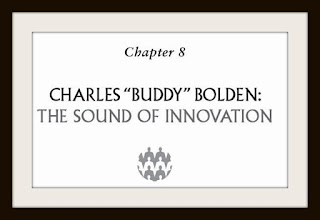 The following is an excerpt from Innovation on Tap: Stories of Entrepreneurship from the Cotton Gin to Broadway's "Hamilton" available now at Amazon, Barnes & Noble, and from Baker & Taylor or Greenleaf Book Group at 800-932-5420.

Note: "King" Buddy Bolden was credited by many of his contemporaries in early 20th-century New Orleans for being the first to play an innovative musical style that would sweep the world and be given its own name in 1912: "jazz."

For a black musician in 1900, the musical community of New Orleans was as powerful and nurturing a force as the machine tool community in New England was for a mechanic in 1800, or the software development community in Silicon Valley was for a developer in 2000.

Buddy Bolden grew up in a world where musicianship was a collegial and competitive sport driven by black, white, and Creole men who competed intensely for crowds, status, money, and the affections of the fairer sex. New Orleans welcomed the poor and disenfranchised from every race, not just to participate but to lead the creative and commercial development of something brand new. As an innovation community, the city was able to attract and nurture talent that would surely have been lost in almost any other setting . . .

A short clip from the movie "Bolden" shows
Buddy being challenged by a young upstart.
No recording of Bolden survives, so both riffs were
created by Wynton Marsalis from the first-hand
descriptions of Buddy's work.

Day after day, entrepreneurs combined the raw material of note and tempo to create new music, tested their creations on live audiences, and readjusted to meet the pressing demands of commerce. The competition for ears and dollars was fierce, though older musicians could often be found teaching the young and mentoring protégés. Kings were anointed and dethroned. Talent was fluid, moving from band to band, carrying new ideas throughout the community. Back rooms, attics, and front stoops became places of constant musical invention, which soared on the breeze, available to any aspiring talent. Musical entrepreneurs ate, drank, and slept their craft.

Competition for audiences was relentless and often colorful. Brass bands paraded through the streets by day, sometimes in step with a funeral and sometimes simply to advertise a dance where they would play that evening. It was not uncommon for two bands advertising different events to meet at an intersection and engage in a “cutting” or “bucking” contest. Winners received bragging rights and a larger paying crowd that evening. As one participant noted about the rough-and-tumble matches, “If you couldn’t blow a man down with your horn, at least you could use it to hit him alongside the head.”

From Eli Whitney and his cotton gin to the Broadway smash, "Hamilton," Innovation on Tap captures the essential themes of entrepreneurship, highlights the rules for success, and celebrates the expansive sweep of innovations that have transformed our world.