“Innovation on Tap" # 3: Jean Brownhill: A Community of Trust 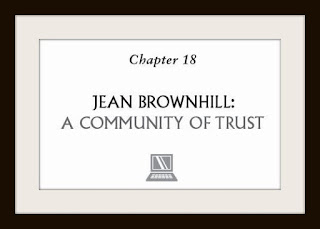 This is the third excerpt from Innovation on Tap: Stories of Entrepreneurship From the Cotton Gin to Broadway's "Hamilton" © Eric B. Schultz, available now for preorder at Amazon, Barnes & Noble, and in quantity from Baker & Taylor or Greenleaf Book Group at 800-932-5420.

Excerpt #1, about Buddy Bolden and the birth of jazz, is here.  Excerpt #2, about Jason Jacobs and the growth of Runkeeper, is here.

Author's note: Jean Brownhill, a trained architect, founder and CEO of Sweeten, is one of the few African-American female entrepreneurs in the US to raise more than $1 million in venture capital and has been named “The Contractor Whisperer” by New York Magazine.  Jean’s amazing entrepreneurial story includes several moments of "epiphany" when she suddenly saw the world in an entirely new way.  Jean has a neat shorthand for these moments, saying her “brain rewired."  Read on:

Then came the terrorist attack on 9/11. “It really freaked me out, which is the understatement of my life. It was another moment when my brain rewired,” Brownhill recalls. “I was coming across the Manhattan Bridge on the train, and we could see the first building on fire. Then we watched the second plane hit. And we just sat there on the bridge. Someone had a beeper. They said, ‘I think it’s a terrorist attack.’ And I’m sitting in a steel tube that I can’t get out of, on a bridge. It was so frightening.”

At a loss for what to do, Brownhill went through the motions of going to work, sitting at her desk, and then having the surreal experience of walking home over the bridge, alongside people covered in ash.

“Over the course of the next few months,” she says, “I started thinking to myself, ‘Oh my God, you just spent five years of your life completely focused on learning how to build buildings. You have no idea why anybody would want to take them down. You have no idea the kind of economics or political conditions that brought this attack about.’ And so, I decided that I needed to understand about money and power.” This quest would mean reading every book she could find about money, trying to understand economic and social drivers. It was a self-education that would eventually lead her away from a traditional career path in architecture . . .

The next year, as part of her ongoing self-education in economics, Brownhill read Roger Lowenstein’s Buffett: The Making of an American Capitalist. “I was so inspired by Warren Buffett and the example he set that I wrote him a letter,” she says. “When I got a response from him, that was the next moment my brain rewired again. Impossible things might be possible. This incredibly important person wrote me back.” She adds, “The letter back from Warren Buffett was the moment that ignited the belief in my entrepreneurial vision, that I could shape my own life. It all clicked in.”