"Innovation on Tap" #2: Jason Jacobs: A Cheerleader For Community 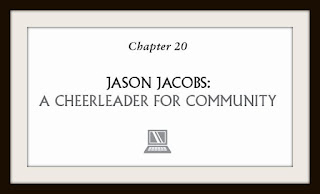 This is the second excerpt from Innovation on Tap: Stories of Entrepreneurship From the Cotton Gin to Broadway's "Hamilton" © Eric B. Schultz, available now for preorder at Amazon, Barnes & Noble, and in quantity from Baker & Taylor or Greenleaf Book Group at 800-932-5420.

Excerpt #1, about Buddy Bolden, is here.

Author's note: Jason Jacobs launched Runkeeper in August 2008, making it one of the first apps in the Apple Store. Three years later, Runkeeper had six million users, a close-knit and enthusiastic running community, and $1.5 million tucked away in a rainy-day fund.  What could go wrong?  Read on:

By 2011, the venture capital world had emerged from the Great Recession of 2008 and markets were frenzied. The entrepreneurial ecosystem had also become infatuated with scale and pedigree. “The tech media really cared about sizes of [funding] rounds,” Jacobs says, “and who they were from. If you wanted to get the credibility and the megaphone of the media—when it came to things like hiring the best people or getting strategic partners interested—there was no better way to do it than to raise a big round. Whoever raised the biggest round was perceived as winning.”

Such a plan required a big idea, and in 2011, Runkeeper launched the Health Graph. It was a strategic direction that would nearly sink the company.

Runkeeper’s Health Graph began by integrating third-party devices, such as sleep monitors and Fitbits. It seemed an impressive idea; there were so many health and fitness devices coming to market, and nobody was emerging as a hub. Google Health had just shut down, Microsoft HealthVault was struggling, and bottom-up, direct-to-consumer relationships were the future. “There was a moment in time when nobody owned this space,” Jacobs says, “and here we were with the biggest audience. We had momentum and a passionate community. Why not us?”

When Jacobs went out to raise his big round, however, there was pushback. “How big could running really be?” investors asked. He was determined to prove the doubters wrong. “If you take some narcissistic twenty-something with a megaphone, all hopped-up on energy drinks, with a big audience, and the press talking about him all day long,” Jacobs says, smiling, “in this emergent field that nobody knows anything about, but everyone thinks is the next big wave, and he just lays it out there with fervor—in that moment of heat maybe you can make a lot of things happen that couldn’t otherwise. . . .”


I just love that quote, which perfectly captures the crazy excesses of the startup world of 2011.  Jason would push Runkeeper to the brink and then--spoiler alert--pull it back, exiting successfully and moving on to chapter 2.  You can read more about Jason's next chapter here and here; it turns out that not only is @jjacobs22 a great interview, but he's also an excellent interviewer.