The Last Battle is the Big One 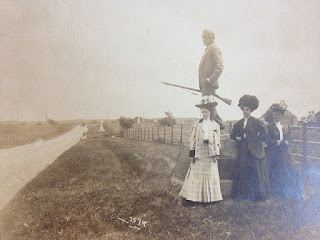 A few hundred yards along Stone Avenue, just off Chambersburg Road on the Gettysburg battlefield, stands a six-foot-high bronze statue dedicated to John Burns (1793-1872).  The inscription includes a report from Major General Abner Doubleday, who wrote that Burns, though seventy years of age and a civilian, "shouldered his musket and offered his services" on the first day of the battle, joining the skirmish line of the 150th Pennsylvania Volunteers.  When the 150th retired from the field, Burns fought alongside the Iron Brigade in some of day one's most intensive action.  He was wounded three times and carried home to recover.

John Burns was a veteran of the War of 1812.  Neither this prior service nor his advanced age mattered when the Civil War invaded Gettysburg.  As gunfire erupted, he grabbed his ancient flintlock and powder horn, more Ichabod Crane in his "swallow tail" coat and black silk hat than Johnny Yank.  Insisting to Union commanders that he knew how to shoot, this citizen-warrior was provided a modern rifle and traded fire bravely with Confederates until he could no longer stand. 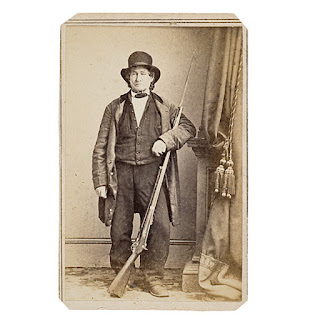 What would possess a 70-year-old veteran to put his life on the line? Perhaps Burns recognized that the single greatest fight of his life, to preserve the American union, had begun.  It did not matter if he had already served his country.  It did not matter that he was entering his seventh decade of life. Burns opened his door, listened for the gunfire, and then walked toward the battle. An Acre of Two, Some Bean Rows

The oldest Baby Boomers are in their early 70s, about the age of John Burns at the Battle of Gettysburg.  Opening their doors in the early fall of 2018, what do they hear?

The sound of Hurricane Florence, possibly the strongest hurricane on record to strike so far north. "As the world warms, the rainfall associated with hurricanes is becoming more intense," says Katharine Hayhoe of Texas Tech. "They are getting stronger, on average; they are intensifying faster; they are moving more slowly; and, as sea level rises, the storm surge from these events can be more damaging."

There's also the sounds of burning in the West. California's Mendocino Complex Fire became the largest in the state's recorded history after several record-breaking wildfires last year.  This destruction may be the "new normal," Gov. Jerry Brownbelieves.  "We're not saying that climate change is literally causing the events to occur," Michael Mann of Penn State says. "What we can conclude with a great deal of confidence now is that climate change is making these events more extreme."

Then there are the other sounds, the quieter ones.  In his 2017 book, Confessions of a Recovering Environmentalist and Other Essays, British novelist, former environmental activist, and co-founder of the Dark Mountain Project, Paul Kingsnorth, opens his door to hear this: 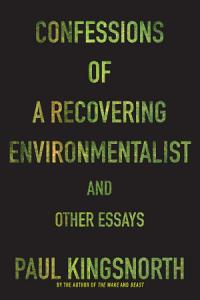 I'm writing this introduction two days after the journal Nature published a new study about Antarctic ice's accelerating decline. It seems that the decline is faster than was expected and that its impact will probably be more significant than feared. “We may now see a sea-level rise of up to 5 or 6 feet within the next 85 years; a rate of change that was previously expected to take centuries or even millennia . . . Extinction levels are higher than they have been for 65 million years. The Earth's atmosphere has not contained as much carbon dioxide as it does today since humanity first evolved. We have eroded half of the Earth's topsoil in just a century and a half, and the rest may last us only another sixty years, as we struggle to feed a ballooning and increasingly demanding human population with less fertile land." These are the sounds of dying, and for Kingsnorth, defeat.

For twenty years, Paul Kingsnorth fought the good fight as a fervent environmentalist.  And then, sometime around 2008, he gave up—or, to use his language, withdrew. "These days my desire, overpowering sometimes, is for some land," he writes. "An acre or two, some bean rows. A pasture, broadleaved trees, a view of a river. A small house, my kids running about. Solidity, hard ground beneath me, something there to stop me sinking," he writes. "Clean air, food, meat, water. Family, Earth, mud, all the small wonders and irritations of life rising up to meet me as I come home. Having a home."

In The Yellowbirds, Kevin Powers' traumatic novel about the Iraqi War, a lieutenant warns his recruits, "People are going to die. It's statistics." His only advice, the best thing he can tell one of his young warriors is to "Get small, Private. You . . . get small and stay small." That's not far off from how Kingsnorth feels, the trajectory his essays paint in response to climate change.

"Since my birth," he writes, "Homo sapien has managed to kill off between a quarter and a third of all the world's wild – i.e., non-human – life . . . We've wiped out 35 per cent of the planet's mangrove swamps and 20 per cent of its coral, over a quarter of all remaining Arctic wildlife and 600,000 square kilometres of Amazon forest. Extinction rates are currently between a hundred and a thousand times higher than they would likely be were humans not around. This is before we even get to climate change. And it has all happened in less than forty years." And, he adds, with only a small and recent assist from global warming. 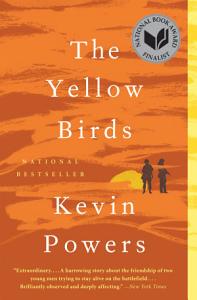 In Kingsnorth's view, nothing is slowing down the coming catastrophe.  The stories we tell ourselves—and stories are the crux of Kingsnorth's Dark Mountain initiative—are fantasy, full of global treaties and climate action and petitions and marches and tweets and talk of "sustainability," a word that suggests we can go on being the way we are.  These activities are comforting.  They allow us to believe that the problems of an "all-consuming global industrial system" can be fixed because we are human and ingenious, and we always find ways to fix our problems.  But, Kingsnorth adds, "This is new. This is bigger than anything there has ever been for as long as humans have existed, and we have done it, and now we are going to have to live through it, if we can." The modern environmental movement, Kingsnorth believes, is in full retreat.

In response, Kingsnorth and his family moved to rural Galway in western Ireland.  He built a dry-lavatory—the topic of one of his essays.  He learned to use a scythe—the topic of another.  He and his wife grow their own food and homeschool their children.  In 2009, he co-founded the Dark Mountain Project. "It grew out of a need to find new ways of relating to the struggle over the future of nature in a human-centred world," he writes. "I thought then, and still think, that the momentum of the global civilisation we have built is unstoppable, and that its conclusion will be either its own collapse, the destruction of most life on Earth or the refashioning of Earth entirely in the image and interests of modern human beings. Either way, the oil tanker is not turning around now, despite the heroic efforts of many." The Dark Mountain Project is designed to tell stories about our world that are truthful and even hopeful—though you have to dig deep into the Dark Mountain to find anything that resembles optimism.

Kingsnorth has plenty of critics.  He is charged with being nihilistic, of being a quitter. On his website, he has even gathered a list of his favorite pejoratives: anarchist, reactionary, communist, left-wing oikophile, crazy collapsitarian, woolly liberal, nativist, cave-dweller, Luddite, Romantic, doomer, fascist and 'lower middle-class eco toff.' “I have written about retreating and withdrawing several times before,” he adds, “and it has often brought down on my head accusations of ‘defeatism’ and the like from the activist-minded. But it’s not about defeat, or surrender. It’s about pulling back to a place where you can find the breathing space to be free and human again. From that, all else follows, if you can pay attention.”  No hope, he believes, is better than false hope.  And the simple truth is this: The world will be just fine.  There is no planetary crisis.  Global warming will bring another shift, the kind our planet has experienced again and again throughout its existence. “Who determined that the planet should remain in the state which humans need and prefer?” he asks. The Earth does not need to be healed.  The loser of our own rapaciousness and industrialization will be us.

Mind you, the global doom-and-gloomers have always whiffed.  Thomas Malthus’s math on food and population was correct, as was Paul Ehrlich’s in The Population Bomb.  But both were dead wrong because they did not know what they did not know.  And maybe that will happen again; at least it is a good story to tell ourselves, even if we won’t find it on Dark Mountain.

The one thing that John Burns and Paul Kingsnorth share, I suppose, is their strong sense of place.  Burns wanted to protect his, Kingsnorth to find and nurture his.  But John Burns thought “small” for the larger good, to which he believed he could contribute.  Kingsnorth has come to conclude that thinking “small” means caring naturally for what lies closest to us, our tiny plot of land, as the most ethical way to meet the end of the world.