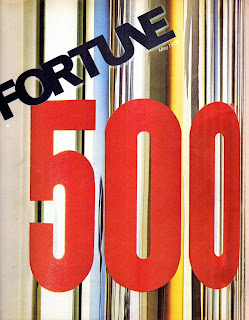 Forty years ago, the 1976 version of the Fortune 500 appeared in Fortune's nearly-2 lb., 350-page May issue.  The list itself turned 21 that year, and along  with its ads and articles, painted a vivid picture of business in a long ago world.

Just how far back was 1976?  Well, young entrepreneurial hotshots like Jack Dorsey (Twitter and Square) and Travis Kalanick (Uber) were both born that year, but so too was old, decrepit  Peyton Manning.  That contrast, I think, defines 1976 as "early middle age."

Those of you alive then might remember the Bicentennial celebration, held in the midst of a pretty rough decade.  The elite 500 itself had taken a beating in 1975; “gripped by recession,” the editors wrote, “the 500 suffered the most severe earnings drop in seventeen years.”

Exxon ($44.8B) was the largest industrial in America in 1976, followed by General Motors, Texaco, Ford Motor, Mobil Oil and Standard Oil of California.  This was the fossil fuel economy in living color.  Tech first appeared in 7th position with International Business Machines ($14.4B) followed by Gulf Oil, General Electric and Chrysler.  Of the next five positions, three were also oil companies. 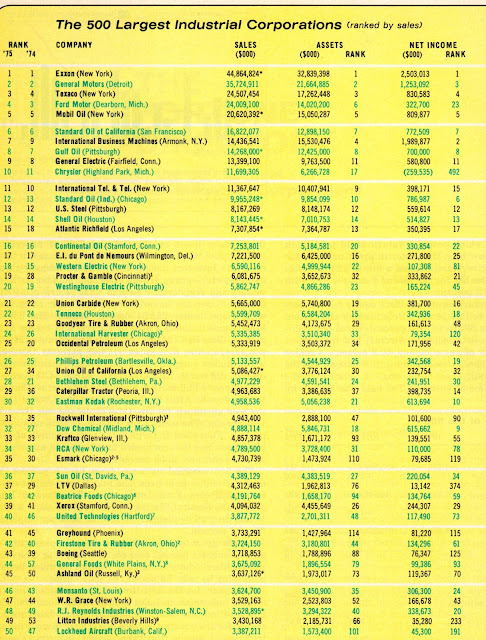 Incidentally, the top 10 Fortune 500 companies last year included three oil companies and two automotive—perhaps not so different 40 years later.  Apple had replaced IBM as the only tech.
The 500th largest U.S. company in 1976, Economics Laboratory (now Ecolab) in St. Paul, Minnesota, was new to the list and checked in at $297 million.

A group profile of the Fortune 500 Chief Executive in 1976 concluded that they were younger than their counterparts from 25 years before.  There were fewer Republicans and Episcopalians, both of which had dominated the list in the early years.  One in four CEOs was the son of a blue collar or clerical employee compared to one in 20 in 1900--a sign that social/economic mobility was still alive and well in American life. 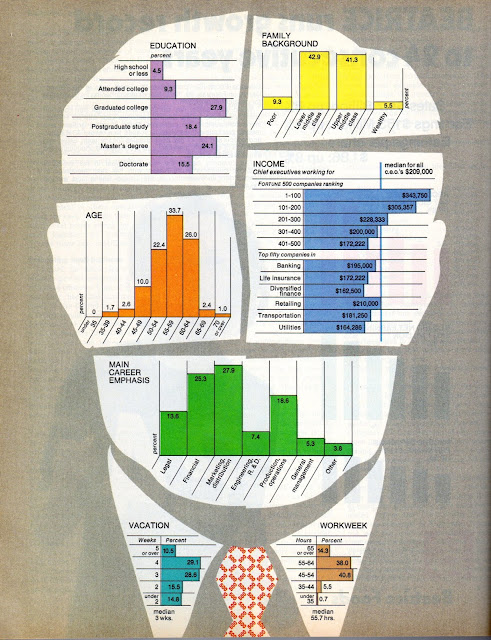 In other ways, however, 1976 was still the Dark Ages.  There was only one woman on the list—Katherine Graham of the Washington Post—and not a single black CEO.  The percent coming up through Engineering was on the decline but via Finance on the rise.  Two-thirds of the top CEOs had switched employers no more than once; in other words, job-hopping still had consequences.  Politically, they considered themselves “middle-of-the-roaders” though few leaned very far left. 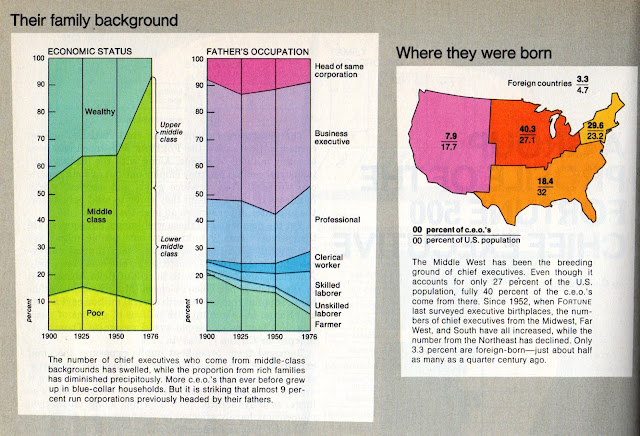 Fortune editors suggested that few American consumers knew these industrial titans—not even CEOs like Thomas A. Murphy at GM or Clifton C. Garvin Jr. at Exxon. 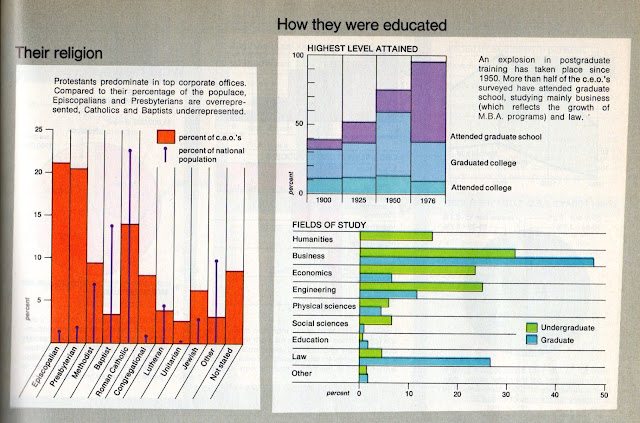 An interview in the May 1976 issue with presidential-candidate Governor Jimmy Carter revealed his goal of getting unemployment below 5%, and his desire for a “complete reorganization of the structure of the federal government. . .whose bureaucracy is now an obstacle to any sort of economic progress.”  There was a detailed article about the woes of the metals industry, including the hard times faced by aluminum and copper.  And the editors of Fortune found American corporations moving to the “Sunbelt.”  These relocations were coming in part as a result of improved transportation and communications.  “Today’s businessmen can be headquartered just about anywhere they want,” the editors concluded.  Companies were also finding Northern and Eastern urban centers falling into disrepair and sometimes crime and squalor.

A critique of the book On Management, a selection of articles from the Harvard Business Review, took the business school to task for focusing on abstract analysis and missing the “unpredictable people and problems” with which real-life managers must cope.  Only the lucky few get to practice what the critic called (capital) “MANAGEMENT,” the stuff of long-range planners that seemed to be the heart of the book.  For most executives, however, “management” in 1976 involved:

the fifty-five-to-sixty-hour week; the list of things to do that never get past the first item; 40 to 60 percent of their time spent in meetings, 90 percent of which were called by others; 15 percent of their time on the phone; an average of fifteen to thirty minutes between interruptions; stolen half-days to produce required reports.
Unlike today's business press, which is almost exclusively about technology, the May 1976 Fortune felt its age--what we now might consider a kind of trough between the second (electric and auto) and third (IT) industrial revolutions.  There was much more going on below the surface than above.  For instance, it wasn't such a bad time to be about 20 years old in 1976, like a Bill Gates or Steve Jobs.

It was only in the advertisements of Fortune that cutting edge products and services began to outline what commercial life would be like in the coming generation.  For example, DataGeneral offered a big computer with “an incredibly easy-to-use COBOL." 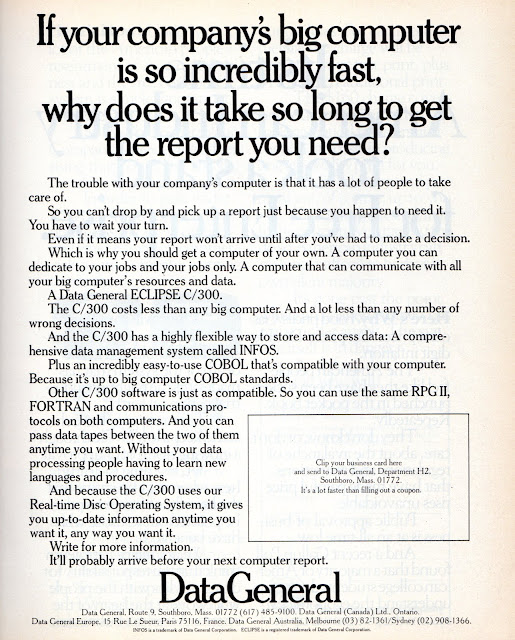 EMI advertised, “We make discs of people,” touting its leadership in recorded music with the likes of Glenn Campbell, Anne Murray and Helen Reddy.  Olivetti provided distributed data processing that “speaks your language.”

“Wang happens to make a better small computer than IBM,” its ad said, featuring a 9-inch diagonal screen, 114 programs, and a processor that ran BASIC programs up to four time faster—for only $3,575. 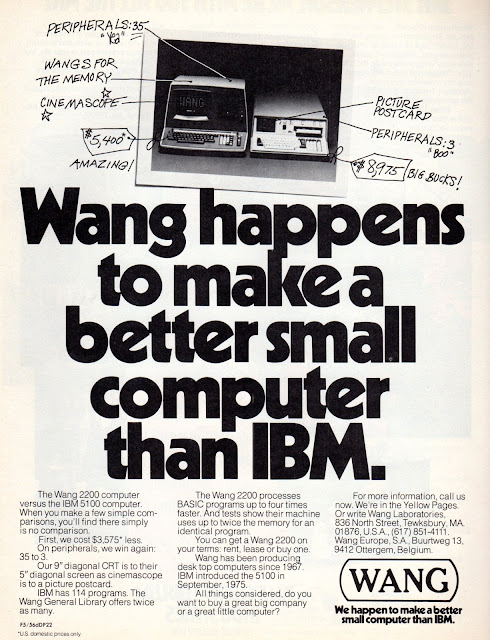 And RCA, “Innovating in electronics, from the beginning,” highlighted the microprocessor: “Never before have we crammed so much thinking power into so small a space. . .thousands of transistors within less than a quarter-inch square.”  RCA’s vision of running chemical processes, controlling machine tools and switch telephone systems, and saving energy, was surprisingly modern.

A poignant advertorial, perhaps reflecting the thoughts of Jimmy Carter, came from Phillips Petroleum.  “It’s time American industry took a stand for Free Enterprise,” the company said.  The reasons: "Food prices.  Gasoline prices.  Car prices.  Double-digit inflation.  The American people feel like they have been suckerpunched in the pocketbook.  Repeatedly.”  Phillips went on to say that regulations were making price increases unavoidable.  Public approval of business was at an all-time low.  American students surveyed by Gallup did not understand their own economic system.  In response, Phillips was offering other companies a series of “Free Enterprise” ads to counter this ignorance.  “It’s gone past the point where an isolated business has come under attack,” Phillips concluded.  “The system itself is in danger.”

Of course, there were ads for liquor, cigarettes, fine watches and automobiles—including the 1976 Oldsmobile Toronado with front-wheel drive designed "to pull the car around corners."  There were plenty of wide lapels and a few outbreaks of plaid.  There were even several younger executives with hair growing over their ears—but still the minority. 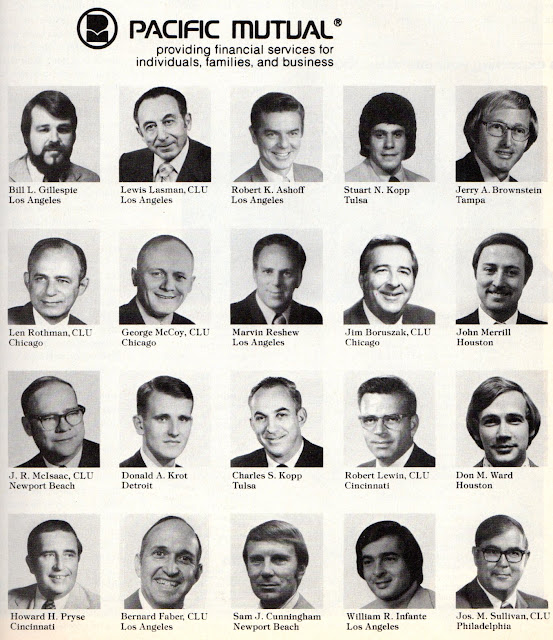 Reading through the issue is a good reminder that, indeed, the past is a foreign country--even if you were around when it happened.  (P.S.--Here's the time I disassembled the 1952 Fortune.)
Posted by Eric B. Schultz