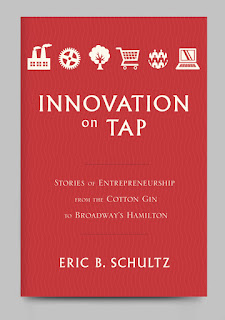 The seventh chapter of "Innovation on Tap" is the story of entrepreneur Willis Carrier and the birth of modern air conditioning, which celebrates its 119th anniversary today. The excerpt below moves the story ahead some 13 years, to the launch of Carrier Engineering Corporation as a standalone company by Willis and his partner, J.I. Lyle.

While we think of HVAC today as a multi-billion dollar, global, growth industry, the story of Carrier’s launch—in the teeth of World War I, when global trade had ground to a halt--reminds us of just how nimble, innovative, and entrepreneurial Willis and his partners had to be to succeed.

For more on Carrier and its storied history, see here.

Carrier Engineering Corporation (CEC) opened for business on July 1, 1915. It was a classic start-up. Willis Carrier rented two rooms in the Mutual Life Building in Buffalo for himself, a secretary, and one draftsman. “We ended up with second-hand furniture—two desks, a drafting board and stool and a few files," his secretary recalled. "We had two wicker chairs for visitors, and Mr. Carrier’s friends would ask him if he had swiped them from a tavern.” 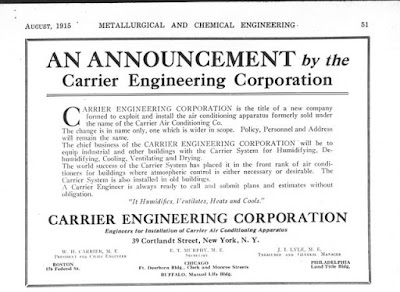 Carrier Engineering raised enough cash to run the business for six months without a sale. "This was certainly cutting it pretty fine," Willis recalled. And, for eighteen days, the new company languished. But what World War I had taken away, it suddenly returned.

The first contract booked by CEC was with the American Ammunition Company in Paulsboro, New Jersey. The fourth job was for the International Arms and Fuse Company in Bloomfield, New Jersey. Ten of CEC's first twenty-nine jobs were for fuse-loading plants and totaled nearly $150,000. Pricing was robust because only Carrier had the skill and speed to complete the installations for such critical wartime work.

These contracts ensured the start-up’s success. In December 1918, Lyle reported that CEC had equipped sixteen fuse-loading plants in the United States and Canada with air-conditioning apparatus. These installations reduced dust and the risk of explosion by providing cool, dry, consistent air—allowing delicate manufacturing operations to continue twenty-four hours a day. Those not acquainted with development of the art of air-conditioning over the previous few years, Lyle said, would have considered this feat impossible.

Carrier and his talented team of engineers found themselves with a wide-open playing field, the result of innovation and intentional community building. But it was also the result of sheer entrepreneurial luck.

“Looking back at those uncertain days,” Carrier said, “I have often thought that—had we not decided then and there to go ahead at once—we never would have formed the Carrier Corporation. If I had waited another month, the whole project would have been doomed.”

As it was, Carrier and Lyle launched a start-up at one of the single worst entrepreneurial moments of the twentieth century. Their intent was to sell a still expensive, often misunderstood product in markets that seemed to be imploding under wartime stress. In retrospect, Willis Carrier knew that the gods of chance had smiled upon him.

By the 1920s, Carrier and Lyle had successfully installed their “manufactured air” in more than two hundred industries. The sale often involved a skeptical buyer asked to absorb new capital and operating expenses. Pioneering customers purchased a product that was invisible and could seem frivolous to traditional managers. Nevertheless, early successes in textile, tobacco, confectionery, and munitions factories led to increasing acceptance across industries and provided proof that the CEC partners had identified a profitable, long-term business opportunity.
And skipping ahead a few more decades . . . In 1999, U.S. News & World Report named Willis Carrier one of twenty-five Americans who shaped the modern era and “the coolest American of the century.” The magazine added, “Carrier, the ‘Father of Air Conditioning,’ is the man who made the Sun Belt—as well as the factory, the movie theater, and the modern home—tolerable in summer.” 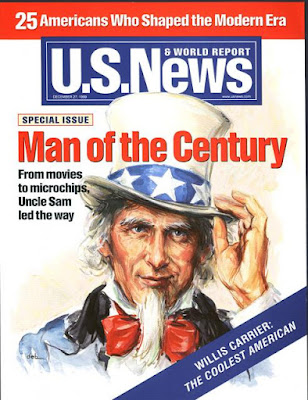 This is the ninth excerpt from Innovation on Tap: Stories of Entrepreneurship From the Cotton Git to Broadway’s “Hamilton” © Eric B. Schultz, available on Amazon and Barnes & Noble.