A Sense of Place: A Trip Back to Pleasure Island 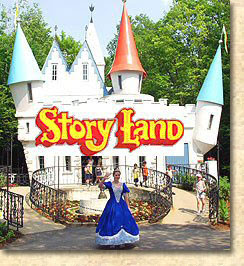 Taking the kids to Storyland in New Hampshire is a rite of passage for New England families with young children. Storyland is a clean, right-sized park that appeals to kids from ages 4 to about 12, that brief golden age when your offspring can use the bathroom without assistance but still like to hang out with Mom and Dad.  Founded in 1954, Storyland is one of a collection of northern New England attractions designed to bridge the tourism chasm between Ski and Leaf-Peeping seasons.

This collection of attractions also includes Santa's Village (1953) and Six Gun City (1957), as well as some of the older, more conventional amusement parks like Canobie Lake Park (1902).  There is no large, Disney-like theme park in New England, and I include especially that mecca of long-lined, shadeless asphalt known as Six Flags New England (the former Riverside Park, circa 19th century).

I mention all this because, beginning last winter, one of my consulting assignments has taken me to Edgewater Office Park in Wakefield, Massachusetts.  This is just off Route 128--America's self-proclaimed "Technology Highway" (despite a regular loss of cell coverage)--and presents as an attractive set of modern office buildings arranged around a couple of ponds. 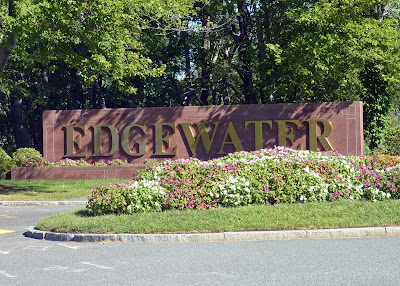 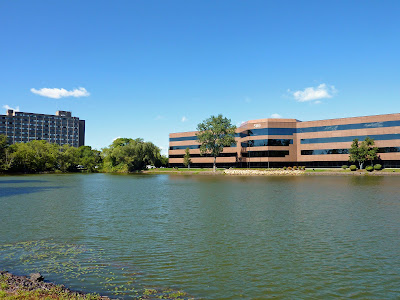 For a good six months after I started this assignment I would pass by a sign on 128 pointing to "Pleasure Island Road" and wonder, as I took the exit, why I'd find myself instead on "Audubon Road." 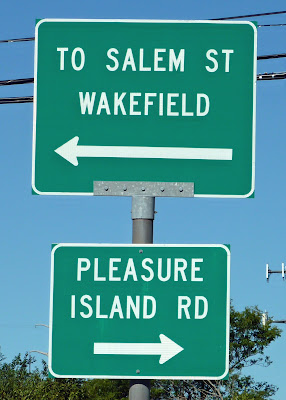 Meanwhile, from time to time over the course of this beautiful summer, as the water table dropped in the sunshine, odd things would begin to pop up in the pond in front of our office building, like so: 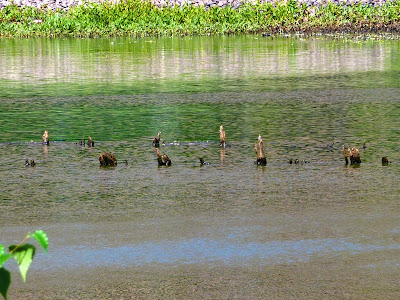 This eventually led me to do a little digging, and with the help of friend and engineer extraordinaire Dana, I discovered that Edgewater Park was sitting on the hallowed ground of the once and former Pleasure Island Amusement Park.  Self-proclaimed the "Disneyland of the East," Pleasure Island operated fitfully from 1959 to 1969, and is still a cherished memory of many of the locals. 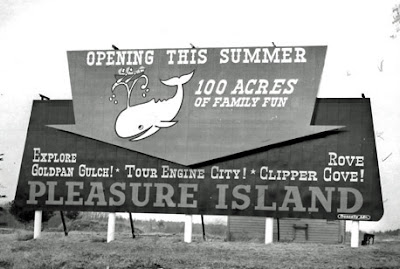 Historians, professional and rank amateur, come in all different flavors.  Some focus on ideas (and win Pulitzer Prizes).  Some focus on storytelling (and make money).  Some (especially the rank amateur sort) focus on stuff (like the antiquarians of old) and end up with arrowheads and brass buckles and Post cereal boxes with King Philip's image on the back (not to put too fine a point on it) littering their homes.

And some focus on location and that kind of odd, satisfying connection felt while walking the past at places like Gettysburg.  (Indeed, location was an essential ingredient in King Philip's War: Find and map the old New England battlefields, villages and garrisons onto the 21st century.)  So, having a lot of the latter kind of historian in me (which I dub for reasons which might be apparent, "locohistorians"), it was pretty cool to suddenly find myself working out Software-as-a-Service business models while looking out the window at a parking lot where a Kodak picture place had once stood.  With a little effort I could even envision the young families of 1962 standing in line to buy film so that they could take pictures of Moby Dick and charging rhinos (more below).

In fact, local historian Bob McLaughlin has done a terrific picture history of Pleasure Island, and accumulated (thanks to the Web) a truckload of incredible commemorative material at his Friends of Pleasure Island website.  (There's a lot of history here and worth a browse to relive those Camelot days.  Bob has been especially diligent in flying round the country, finding all of the folks who operated and starred at Pleasure Island.)  Bob also, from time to time, does a walking tour of Edgewater to help visitors visualize the old Pleasure Island.  Not many weekends ago I found myself on just such a tour.

Bob handed out pictures as we walked, and--like a good locohistorian--I tried to "map" the old Pleasure Island onto the new Edgewater Park wherever possible.

Here, for example, is another view of those wooden pilings in the water (click on the picture and then look out to the middle of the pond at about 12 o'clock), while the picture in hand shows the old schooner whose ribs they represent, probably burned to the ice line when the park was abandoned. 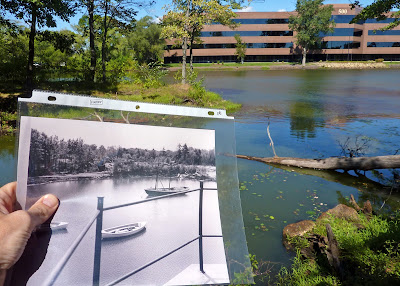 Here is a little bit of the old underwater track on which Moby Dick rose from the water to (presumably) amaze and delight guests. 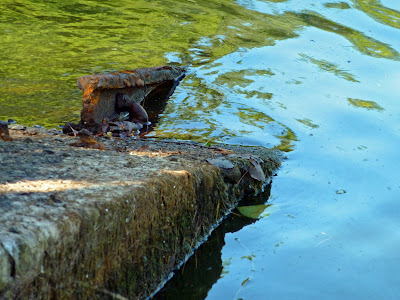 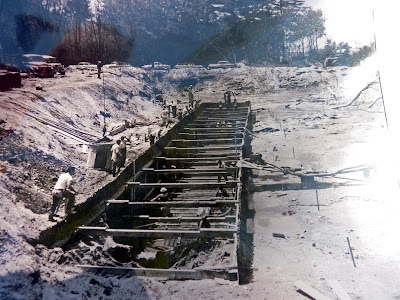 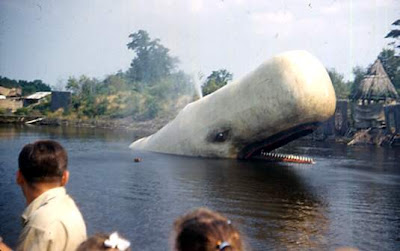 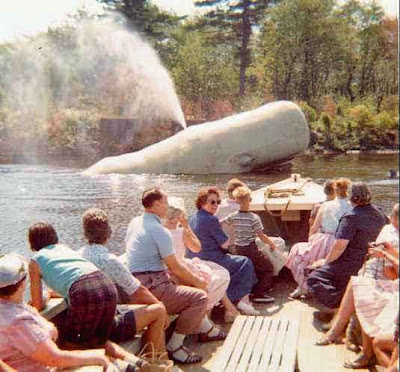 Here's the old rusty track of the charging rhino, left intact in the woods: 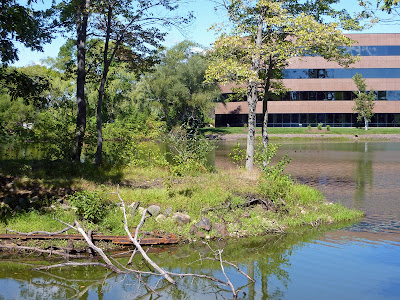 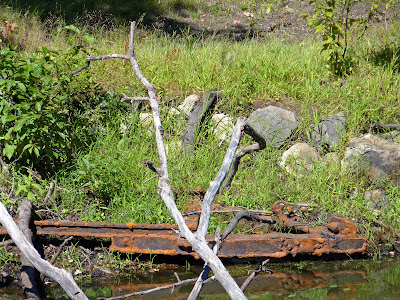 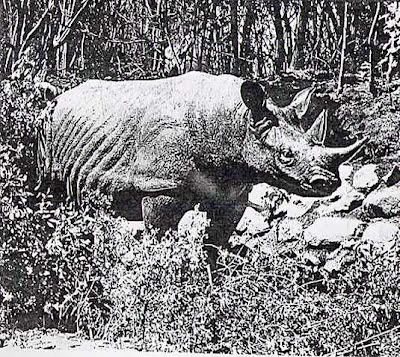 And here's a "present on past" look at Edgewater Drive as it makes its way between the two ponds.  It's a kick to realize that an old steam engine ran the route our cars take today. 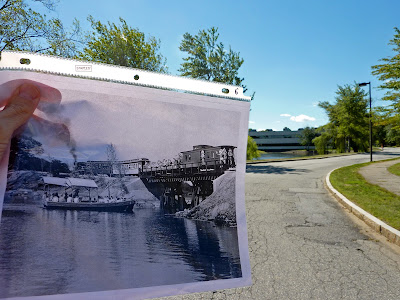 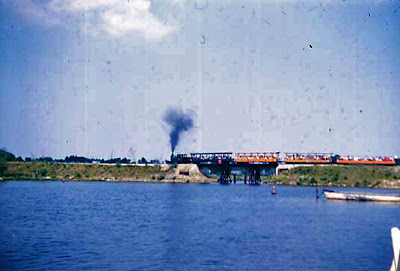 It turns out that Pleasure Island the amusement park is a thing of fond local memory.  However, Pleasure Island the business left something to be desired, and despite a noble effort at keeping water attractions designed by southern Californians working in the cold of New England, never fulfilled its promise.

Much is made of the weather as a reason for Pleasure Island's ultimate demise, though Storyland, for example, is an entire climate change (or two) to the north and has prospered throughout the years.

I think there might be another reason that Pleasure Island was gone in the space of one short decade.  As I look at the old photos, I can only conclude (despite all the cherished memories of its visitors) that Pleasure Island was less the "Disneyland of the East" and perhaps more the "Edaville Railroad of the North" (with all due respect to Edaville, which ran the train at Pleasure Island but has had its own dance with bankruptcy throughout the years).  I know it was the 1960s and all, but I keep looking at Moby coming out of the water and wonder, even in the golden age of 1965 when all young fathers apparently smoked pipes (see the final illustration), if a ten year-old might have felt something less than a sense of wonder and amazement. (Besides being a somewhat underwhelming signature attraction, Moby required a great deal of maintenance.) 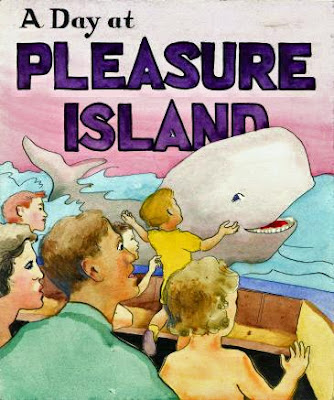 Still, as I drive into Edgewater and try to envision the crowds (including the 1960 appearance of Duke Ellington, Dave Brubeck and the world-class musicians of the Newport Jazz Fesitval), I think of the final thing I heard Bob McLaughlin say on our walking tour.  When Pleasure Island was conceived in the 1950s, Westerns were one of the most popular forms of entertainment in America, and kids were delighted to see, for example, a staged gunfight at Goldpan Gulch (and regular visits from Rex Trailer, for you locals).

By 1969, Pleasure Island's last year, Woodstock was in session.

Get it?  Fashion and short product life cycles are hardly new.

Bob believes, had the planning been done even five years earlier, Pleasure Island might have had a chance to establish itself and then move with the times from a more solid financial base.  As it was, it's hard to even know (most business records are missing) if it ever had a profitable season.

Of course, these were also the years of MIT and Raytheon, Wang and DEC.  Land along Route 128 grew more and more valuable as technology companies exploded.  Perhaps Pleasure Island might have survived the end of Gunsmoke, only to run into the rise of the computer.  But maybe not; its certainly hard to quibble with the amount of intellectual energy, innovation and job growth going on at the old Pleasure Island site today. 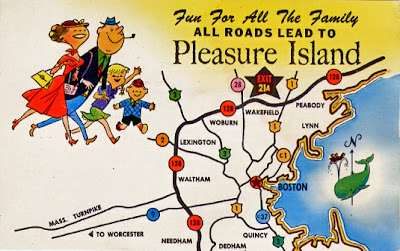 Anyway, having a sense of place is good.  It's one of the things I love about history.  And there are some days, for certain, when it would be nice to abandon the business planning and hunt for quarterly revenue, walk down to the pond's edge, and watch for Moby Dick to come roaring out of the water again.
Posted by Eric B. Schultz