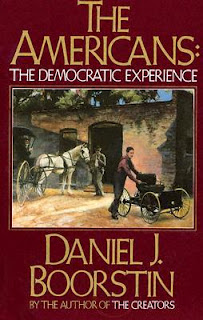 The Americans: The Democratic Experience by Daniel Boorstin is full of compelling stories about the formation of , and especially good in spotting unconventional entrepreneurs.


Boorstin, who died in 2004, was a lawyer, a professor at the for 25 years, the librarian of Congress, the senior historian of the Smithsonian—the list goes on.  But what is most impressive is that Boorstin never, ever stopped writing, including dozens of books and two major trilogies (of which The Democratic Experience is part, and the Pulitzer Prize-winning part at that).

When Boorstin went before the Senate to be confirmed as librarian of Congress, several senators demanded that he not write while serving in the post.  He refused, but promised to do it on his personal time: weekends, evenings, and from 4 a.m. to 9 a.m. every morning.

One of the better-known stories Boorstin tells in The Democratic Experience is of the invention of the sewing machine, including the commercial and patent battle in the 1850s between Isaac Merrit Singer and Elias Howe, Jr.   In 1850 the sewing machine was a curiosity.  By 1870, 700,000 were being manufactured annually. By 1900, 8,000 patents had been issued on the machine, a tribute to relentless improvement. 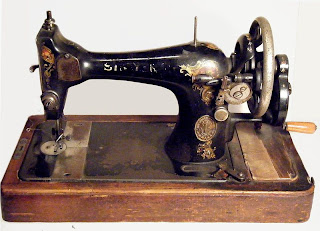 This “tireless ally of the world’s great sisterhood” (as an immodest 1880 Singer brochure described it) turned out not to do precisely what it had been invented to do: reduce the time and drudgery of sewing.  An 1867 Atlantic Monthly article wondered aloud if there was any woman alive who could say her time spent sewing was less after than before the sewing machine.  “As soon as lovely woman finds that she can set ten stitches in the time that one used to require, a fury seizes her to put ten times as many stitches in the garment as she formerly did.”

So, clothing got better, but the time spent making it did not.  And the real innovation that resulted changed the very meaning of clothing and led to a “clothing revolution” in the second half of the 19th century in .

It’s hard for us to imagine what this meant in a world of ill-fitting, ethnic, hand-me-downs.  Imagine a Russian Jew, an Irish Catholic, and a French Huguenot all arriving on on a Monday, and by Thursday all wearing essentially the same affordable, well made, good-fitting clothing as they walked down Broadway.  The sewing machine was stitching Americans.

Boorstin points out that this “democracy of clothing” bedeviled Europeans who visited and could not tell a person’s class by his clothing.

Ready-to-wear clothing is what I would call, for lack of a better term, a binding innovation.  It bound people more closely together and built community.  It leveled and connected individuals in a kind of invisible web.  In the case of nineteenth-century , it helped form a national identity. 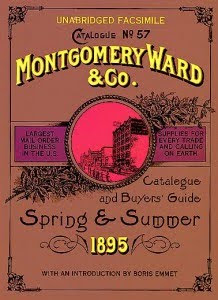 Now, consider the most binding innovations in American history.  The newspaper would have to have been one; Boorstin writes about farmers who subscribed to three daily newspapers when they became available (postal delivery being another binding innovation) just to reduce the isolation of the farm.  The Montgomery Ward and Sears catalogs were binding innovations as well, as was the retail storefront, mass merchandising and advertising.

Perhaps the granddaddy of all binding innovations in , and the one we have come to hate most, is the television.  Millions of people from to to to would (not so long ago) rush home on Thursdays to watch the same show at 8 p.m. so that they could talk about it the next morning at work.  Television taught a country built in towns and states and regions what was beautiful, funny, sad, and historic.  It created national products and stars.  It taught us—whether Southerner or Westerner or New Englander-- how we wanted to look and smell, how we should decorate our homes, and what we should covet at Christmas.

Which gets me wondering, have the important technologies of the last twenty years been binding in nature?  This seems particularly important if you consider that newspapers are imploding, television declining and fracturing, and ready-made clothing (from Carhartt to Abercrombie and Fitch) is as apt to denote class as not.

The MP3 (and iPod in particular) is clearly a splintering innovation; it isolates and reduces civil discourse.  So, too, the personal computer, which is a solitary experience that has replaced “group” television as the after-dinner technology of choice.  Counter this, of course, with social networking which binds, but in a funny kind of way—around tribes, as Seth Grodin might say--and quite often transitory and hurtful ones.  (I saw a 300,000 person tribe on Facebook today all planning to boycott BP, which would wipe out the local distributor who had nothing to do with the Gulf spill and likely push BP’s oil to .  That’s the kind of tribe that clearly shows the sometimes clueless nature of binding social networking.) 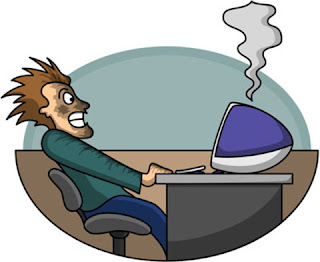 The Web was supposed to give us democracy (like ready-made clothes) and instead gave us massive powerbrokers like Google and Facebook.  Google binds, but only as a common tool; the activities we undertake with it are separate and personal.

What is our greatest innovations in the current century are all about being unbound and fractured?  Even splintered?
Posted by Eric B. Schultz