[Note: The story of J.K. Milliken and Mount Hope is chapter 10 in "Innovation on Tap," now available on Amazon.]

This is a story about employee benefits, lots of benefits.  More benefits than Google’s free transportation and gourmet lunches, Evernote’s housecleaning services, or Genentech’s last-minute babysitters.  But it’s also a story about what an employer might expect in return for all those benefits.

It starts in the little Massachusetts village of North Dighton in 1901 when 26-year-old Joseph Knowles Milliken, “J.K.” to his associates, examined an old abandoned mill beside the flowing waters of the Three Mile River, 15 miles upstream from Mount Hope Bay.  The village surrounding the mill seemed as sad and dilapidated as the rundown facility itself.  Seizing opportunity, however, J.K. established within six short months a cloth finishing mill to support the booming textile trade in nearby Fall River, New Bedford and Rhode Island.  Mount Hope Finishing was profitable from day one and its estimated initial need for 175 employees would eventually balloon to 1,400.

To remain successful, J.K. Milliken required copious and sure amounts of two essential raw materials, water and skilled labor.  At capacity, the mill required ten million gallons of clean water every day, and the young entrepreneur was successful in securing water rights for some 25 miles upstream.  It was in the securing of labor, however, that J.K. Milliken would leave his mark.

Shortly after acquiring the mill, Mount Hope purchased and refurbished thirteen old tenement homes associated with the abandoned factory.  Each was redecorated and outfitted with new plumbing.  Over the next 50 years the company acquired, built and rented nearly 200 homes, many small bungalows and cottages, but almost all single-family and distinctive.   Each had “an inviting entrance, a well-kept lawn, its little garden with attractive flower bed, and was located to the best advantage along the fine concrete and macadam highways which run though this model village.”  Mount Hope mowed lawns, trimmed trees, raked leaves, and cleared snow for its tenants.  All houses were repainted and re-papered every three years.  Rents ranged from $1.25 to $5.00 per week (on average salaries set to exceed those of nearby Fall River).  The newest houses (circa 1922) included steam heat, hot and cold water, baths, set tubs, hardwood floors, electric lights, gas, sanitary closets and sewer connections.

In 1901, Dighton had only one macadam road.  In the ensuing decades, Mount Hope paid to construct and maintain dozens of paved roads throughout the town.  The company financed the village’s power system and provided water and street lighting.  Mount Hope officers were selectmen, on important town boards, chief of police and hosted the fire department.  Mount Hope created a beautiful town park and hosted employee clambakes and lobster boils.  It also sponsored ski trains to New Hampshire and excursions to Cape Cod for its workers.

The company converted an old homestead into a 15-bed hospital, including an operating room, for its employees and their families.  Fees were nominal or free.  A nurse from the hospital visited the plant daily.  (Update January 2015: Since posting this article, I have met a dozen or so people born at the Mount Hope Hospital.  The experiences of their mothers and families were uniformly positive.)

The Mount Hope Finishing Company and North Dighton became a sensation, a company town that attracted both international industrialists and local tourists who marveled at the largest factory of its kind under one roof surrounded by picturesque streets, freshly-painted bungalows, and immaculate lawns—a far cry from the traditional factory tenement.  In 1924, an article in the Fall River Globe painted as rosy a picture of life in North Dighton as imaginable.  It was a bee-hive of industry, a modern New England village of rare beauty and “in a class by itself.”  J.K. Milliken, the article noted, often ate lunch and dinner in the company restaurant with workers, “never assuming an attitude of patronage or condescension toward them, but coming and going just as the fireman or the chauffeur would.”  A 1927 Mount Hope publication boasted that “the town of North Dighton itself, which like the company is the creation of Joseph K. Milliken,” expressed both the pride and sometimes tone-deaf nature of Milliken’s leadership.

Such benefits created an enormous reservoir of employee goodwill as most of New England’s textile mills unionized or fled the state.  Mount Hope Finishing was untouched by the Fall River strike of 1904, the 1912 and 1919 strikes in Lawrence, Massachusetts,  the 1922 strike that affected all New England textile, and the 1928 New Bedford strike in which 27,000 workers in 56 mills picketed for six months.

However, the textile workers' strike of 1934 was the largest in United States labor history to the time, involving 400,000 textile workers and lasting twenty-two days.  Mount Hope Finishing was singled-out by the United Textile Workers as the only large non-union plant in the region.  Milliken reacted aggressively when he heard that the strikers planned to visit the village, bolstering the town’s three-man police force by deputizing some 50 employees armed with clubs and pistols.   Every street leading into town was barricaded with piles of sandbags, and every plant entrance manned by armed guards including 20 contracted from New York and New Jersey.

One Dighton resident recalled that North Dighton “was sealed off during those days.  Anyone wishing to proceed into the village had to be vouchsafed.  Their automobile was stopped, and a guard in a temporary shack telephoned the plant for a decision whether or not the person could proceed up the street.  If not, the car was turned back.”  When the legality of this procedure was questioned, the resident noted, “Massachusetts Attorney General Joseph E. Warner, whose duties up until that time had largely concerned enforcement of Prohibition, ruled that the procedure was legal.  Needless to say, his legal acumen on the point was widely questioned.”
Fortunately, bands of strikers appeared only occasionally at the barricades and the crisis passed in a few weeks.  One thankful villager remembered, “The people of North Dighton did more to turn back the mob of strikers than the New York goons.  All the help was on J.K.’s side.  They wanted no part of unions in those days.”  In the wake of the threat, Milliken made a $10 thousand gift to the town, increasing the police force to one in every 30 residents—23 regular, 86 reserve—who drilled with rifles and bayonets for a few months before the town returned to its more typical criminal activity of dogs invading chicken coops.

There remains a great debate in the local history of North Dighton as to whether J.K. Milliken was a benevolent paternalist or a feudal baron and despot.  Despite the generous benefits offered workers there were plenty of catches, from no choice of wallpaper and paint in your home to an inability to borrow money from the local bank (J.K. preferring to approve loans directly from the company, and only for appropriate purposes—victrolas and pianos not being on the list).   Life in town, while supremely pleasant, did not include speaking out against a J.K. position at annual meeting for fear of being without home and job.

Political economist Richard T. Ely visited the most famous of company towns, Pullman, Illinois, in 1885, recording his impressions for Harper’s Magazine.  Located about ten miles from Chicago and founded by the Pullman Palace Car Company, the town had grown in four short years to 8,000 residents, half of whom worked in one of the local Pullman factories.  Ely loved the wide streets, architecture, and cleanliness, but abhorred the "town's" governance.   People were afraid to speak out.  Some felt they were being watched by a company “spotter.”  Criticism was absolutely forbidden. “The power of Bismarck in Germany is utterly insignificant when compared with the power of the ruling authority of the Pullman Palace Car Company in Pullman,” Ely concluded.  “The idea of Pullman is un-American.”

However, Richard Ely the sociologist also gave way to Richard Ely the economist, writing, “It should be constantly borne in mind that all investments and outlays in Pullman are intended to yield financial returns satisfactory from a purely business point of view.”

Nothing more, nothing less.

One could argue that J.K. Milliken built a model New England village not because he was paternalistic and not because he was an autocrat or despot, but because he was a businessman attempting to make sound investments for his company, shareholders and workers.  In the textile strike of 1934 he saw his investment returned in spades.  1951 would break differently; his workforce would finally vote union and Mount Hope would vanish from North Dighton, the caboose in a 50-year express of textile investment running from New England to the South.

One cannot help but think that 50 years of success and a thriving, content workforce--while the rest of the industry was falling to pieces around him—is anything but unqualified success.  J.K. spent lavishly on his employees because it was the right business decision.  The technology firms of Silicon Valley are undoubtedly doing the same, connecting their employees in a kind of virtual company town of lavish benefits that presumes, if not loyalty, at least a reasonable business return.  May they all earn the returns of Mount Hope Finishing.

Incidentally, a visitor to present-day North Dighton will enjoy the addition in the 1950s of a long, wide, unencumbered boulevard linking North Dighton and nearby Taunton, the best and fastest way into the village.  No speed bumps.  No guard shacks.  All constitutional rights intact.

January 2015 update: I wanted to thank especially Elaine Varley for her help with this article, including hosting me at her home in Dighton to view documents, pictures and sample books left by her father, a long-time employee at Mount Hope.  Mrs. Varley died in June 2014 at age 95 (see here).  She was a treasure and will be missed.  Here is an article from the Taunton Daily Gazette showing Mrs. Varley hosting a Mount Hope Finishing memorabilia collection.


Here is the newsletter announcing the final closing of Mount Hope in March 2012. 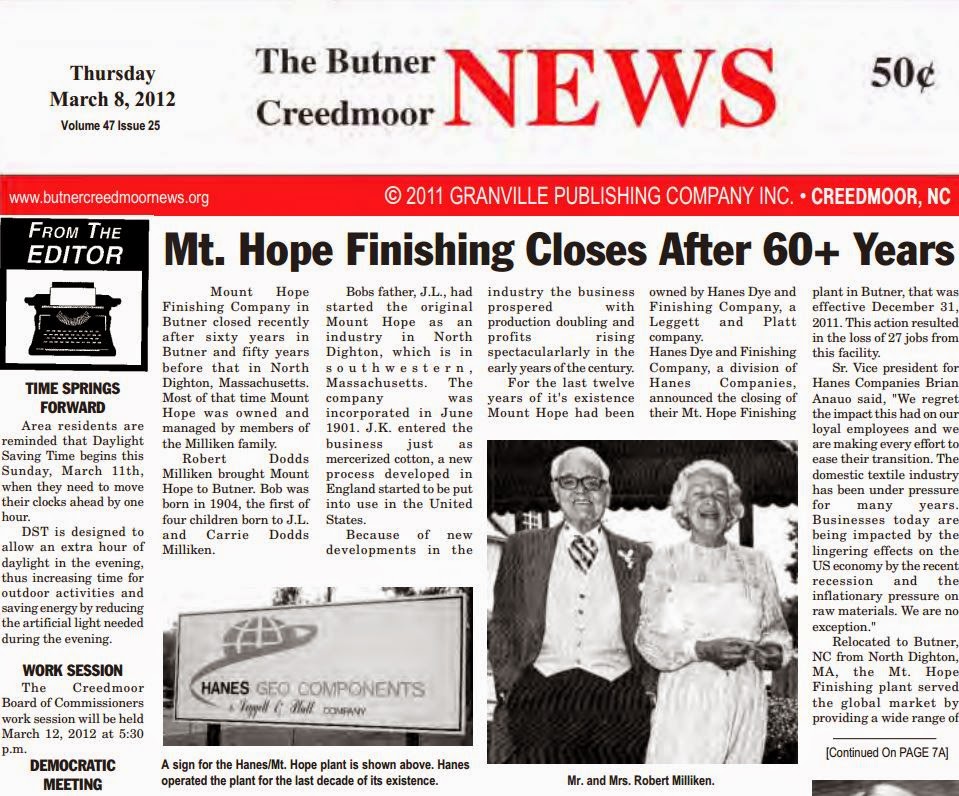 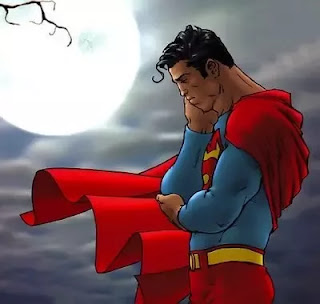