Why We Still Need Mister Rogers 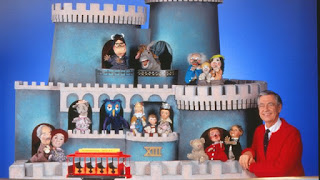 First, a confession.  I never really got Mister Rogers, at least while he was performing in his children’s television show.  Maybe it’s because I was very young when PBS, in the guise of its predecessor (NET), was still a primordial ooze of Physics professors writing long equations on chalkboards, grainy British programming, and a cooking show where a quirky lady taught viewers how to turn a calf’s foot into aspic.

When Mister Rogers launched in 1966, it took a while to understand that he was something different and, once paired with Sesame Street in late 1969, something better for children to watch than Soupy Sales or Bozo.  By then I had outgrown my Mister Rogers moment, so only later did I come to appreciate who Fred Rogers (1928-2003) was and his impact on so many people.  Now, after reading Maxwell King’s The Good Neighbor: The Life and Work of Fred Rogers (Abrams Press, 2018), I have come to understand that we need people like Fred Rogers more than ever.

When Mister Rogers was in his prime—and his show ran over for thirty years until 2001--his Neighborhood could reach 10 percent of America’s households, some ten million children.  And there were plenty of kids who did get Mister Rogers right away.  WGBH in Boston had a meet-the-host event in 1967 expecting five hundred people.  Five thousand showed up.  Rogers became among the most beloved of children’s performers (a term he disliked), often singing to them, “It’s you, I like, the way you are right now.”

After the 2012 massacre at Newtown, Connecticut, and again after the bombing at the Ariana Grande concert in England in 2017, Americans flocked to the web to hear Mister Rogers'—a Presbyterian minister—most famous words of comfort: “When I was a boy and I would see scary things in the news, my mother would say to me, ‘Look for the helpers.  You will always find people who are helping.’” It’s hard not to think that people were searching for that wisdom this week when tragedy came to the historically Jewish Pittsburgh neighborhood of Squirrel Hill where Rogers lived and filmed his show.

Here are a few of my takeaways from Maxwell King’s excellent biography:


1. Fred Rogers was born in Latrobe, Pennsylvania, the town reflected in the colorful homes and parks of the neighborhood shown at the start of every episode of Mister Rogers’ Neighborhood.  Rogers was a school-year ahead of another of Latrobe’s favorite sons,  Arnold Palmer.  Palmer’s father tried to teach Fred golf, but with little success.

2. The Rogers family was rich, part of Pittsburgh’s industrial and social elite.  Fred’s parents owned a beautiful home with servants, favored Cadillacs, summered in Atlantic City, and attended opera and musicals in New York City.  Fred’s mother shopped in Manhattan at Christmas, purchasing as many as 1,500 presents for friends and family.   Fred was chauffeured back and forth to school each day and given a Steinway concert grand piano at ten years old.  When he took an apprenticeship with NBC in 1951, he moved into one of the tonier East Side neighborhoods and brought along his Steinway concert grand.  Fred and his wife, Joanne, were given a vacation cottage on Nantucket.  In time they came to live more modestly, but when wealth mattered most, it was pivotal.  Rogers was able to abandon a promising career at NBC to gamble on a nonprofit, educational TV startup in Pittsburgh—undoubtedly bankrolled in part by his family.  And when the major networks offered to take his successful children’s program from PBS to commercial TV, he turned them down.  Later, when he had the opportunity to market his puppets and famous trolley to children, he passed on that opportunity as well. Having wealth didn’t make Fred Rogers, but it certainly made Mister Rogers.

3.  Rogers was kind, authentic, and genuinely good, but he wasn’t perfect.  “He had a temper,” King writes, “he made bad decisions, and on occasion he was accused of bad faith.  He had difficult times with his own sons when they were young . . . he could, at times, be tone-deaf in relating to adults.  The man who conveyed a Zen-like calm on television saw a psychiatrist for decades.”  One of Rogers’ colleagues, leaving a contentious meeting with the performer, remarked, "I wonder at what age is it that Fred no longer likes you just the way you are?"

4. When Mister Rogers spoke with one of his friends, he could shift into something referred to as “Fred-time”:  He was calm, patient, and so focused that the conversation seemed to occur at an “otherworldly pace.”  He once told Charlie Rose of PBS that “the white spaces between words are more important than the text,” and Rogers used silence as a tool, a way of listening to others that he called “graceful receiving.”  (Here’s a related 2008 post on leadership in the white spaces.) 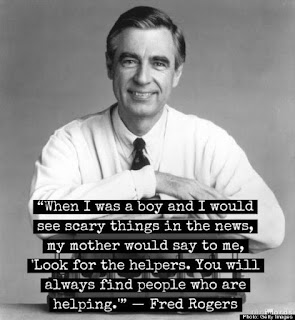 5.  Fred Rogers’ lifelong email address, zzz143@aol.com, was a reminder to the world that he slept well every night and weighed 143 lbs. his entire adult life.  (Think about that, how hard it is to maintain the same weight for a half century.)  It suggests, for all his easygoing charm, that there was a discipline and underlying steeliness to Fred Rogers.  He swam every day without fail, for example.  The script for each show was thoroughly vetted and perfect down to the last word.  He was kind, patient, but demanding of those around him, kind of a mix between Mother Theresa and Steve Jobs.  When he calmly entered the set, smiled, and donned one of his famous sweaters (each knitted by his mother), there were hours of careful, sometimes agonized planning behind every word and every musical note.  The worst sin for Fred Rogers was to be unprepared.

6. Despite Rogers’ many accomplishments across five decades, the single most important moment in his career may have come in 1969.  Looking for ways to finance the Vietnam War, President Richard Nixon asked Senator John Pastore of Rhode Island, who chaired the Subcommittee on Communications, to help him reduce funding for public television.  Nixon's predecessor, Lyndon Johnson, had allocated $20 million to help launch the Corporation for Public Broadcasting, and Pastore's job was to get at least half of that back.  Pastore was considered a blunt, no-nonsense guy and intimidating in his role as Subcommittee chair.  Rogers, who was not yet nationally famous, was invited to speak before Pastore and his Senate panel.

“In what is still considered one of the most powerful pieces of testimony ever offered before Congress,” King writes, “the mild-mannered Fred Rogers employed his gentle demeanor and soft voice to dominate the proceedings, silence a roomful of politicians, and nearly bring the gruff committee chairman to tears.”  Rogers placed aside his prepared remarks and just began speaking, telling Pastore that he cares deeply about children.  He told him how the public had come forward to fund his program.  And he explained the difference that public television could make, how it could create for children a “meaningful expression of care.”

Pastore’s response was legendary: “Well, I’m supposed to be a pretty tough guy,” he said to Rogers, "and this is the first time I've had goosebumps for the last two days."  Rogers helped to save the funding, and the next year President Nixon invited him to chair the White House Conference on Children and Youth.

In a world of noise and incivility, Mister Rogers is a good reminder of how things can be.