Not for the Squeamish: Eli Whitney’s Greatest Innovation

There are few entrepreneurs in American history more controversial than Eli Whitney.

We all know he invented the cotton gin, even if we wouldn’t recognize a cotton gin were one to land in the middle of our driveway.  Whitney, we are told, made Cotton “King,” extended the institution of slavery and started the Civil War.

Or not.  There’s that nagging story about his friend, Catharine Green, really inventing the gin.  And there are all those “saw gins” manufactured by other mechanics that worked better than Whitney's original gin, and all those patent cases he lost in court.

Even if all that seems controversial, at least we can be sure that Whitney was the Father of Mass Production for his use of interchangeable parts in the musket locks he made for the US government.  In fact, in one of the great product demos of all time--presented to President Adams and future President Jefferson--Eli Whitney allowed the founding fathers to miss and match parts, building must locks in any combination they liked.

It was a tour de force.  One biographer concluded, “For the initiation of the mass production that has given the United States the highest material standard of living of any country in the world, the nation is indebted to the genius of Eli Whitney.”

Or not.  Around 1960 a clever technology historian disassembled a batch of Whitney’s musket locks and discovered them to be hand-filed, irregular, and marked for specific guns—in other words, not interchangeable at all.  His product demo was a scam.  And even Jefferson fell for it. 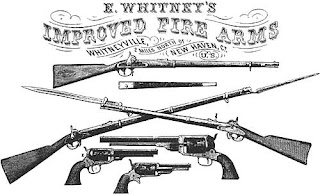 One disillusioned historian wrote, “Except for Whitney’s ability to sell an undeveloped idea, little remains of his title as father of mass production.”  Another said that Whitney had been demoted from “Father of the American System of Manufactures to a fast-talking arms contractor.”

First the gin, then interchangeable parts.  It’s been a long, hard fall for the guy who was the 19th-century's version of Steve Jobs.

But that still leaves Whitney's last innovation, little known and never disputed, but perhaps his greatest.

It came in the inventor's final years, when he was wracked with pain by what we now guess to be an enlarged prostate.  [Squeamish gentlemen should stop here.]  In between bouts of what he described as “the rack of the Inquisition,” Whitney studied every piece of medical literature available, poured over drawings of the human body, and “acted rather as if he himself had been the physician.”  He also thoroughly interrogated his talented doctor, Nathan Smith, the fifth graduate of Harvard Medical School and founder of the Dartmouth, Bowdoin and Yale medical schools.

Whitney then wrote to London and Paris for materials, and—demonstrating the same mechanical brilliance that marked his career--constructed “instruments” that brought him immediate relief.

The delicacy of the time did not permit a full description, but we now presume that Whitney made for himself a kind of flexible catheter, reducing his own pain immensely and perhaps adding two years to his life.

So, while I sit here typing (and, yes, squirming just a bit), I must admit that the whole episode really, truly impresses me.  We can question the origins of the cotton gin.  We can debate the existence of interchangeable parts.

But it’s hard not to think that Whitney’s most impressive innovation of all was his very last one.