Things I Learned From John Steele Gordon's "An Empire of Wealth" 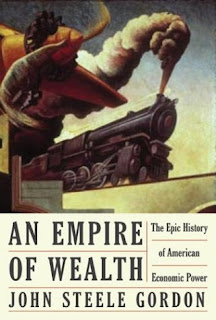 John Steele Gordon’s 2004 An Empire of Wealth: The Epic History of American Economic Power is the compelling story of American business.  It's also a marvel of synthesis, with Gordon pouring fifteen pounds into a ten-pound sack, including something surprising on virtually every page.  Empire reads like a novel--lucid, fast-paced, and profoundly optimistic about capitalism while still exposing its warts.

A contributing editor to American Heritage, Gordon is author of books about the history of Wall Street, the national debt, and the laying of the Atlantic cable.  His web page quotes Oscar Wilde: "The one duty we have to history is to rewrite it," a sentiment which I take to mean that history must be continually updated if it has any chance of speaking to its contemporary audience.  In Empire, Gordon has done just this.

The New York Times found Empire especially strong with character-driven financial histories (which include Vanderbilt, Rockefeller, Ford and many lesser-knowns).  The Cato Institute praised Gordon for coming down on the side of free trade, sound money and freely moving prices.  The Motley Fool's review was admiring, instructive in its own right, and worth a read.

For me, An Empire of Wealth has earned a place on the bookshelf next to Drucker's Innovation and Entrepreneurship, Howe's What Hath God Wrought, and Boorstins' The Americans--all books that I turn to from time to time for insights they offer on characters, events or situations.  And sometimes I'm just looking for a few minutes of pleasant reading.

Below is a short and incomplete list of things I learned about American commercial and political history from Empire of Wealth:

As a reminder of how well older technologies can adapt and stay relevant, the Erie Canal was obsoleted by the railroad in the 1850’s but would continue to move product for another 120 years.

In 1844, 73-year old Philip Hone wrote, “The world is going too fast.  Improvements, politics, reform, religion—all fly.  Railroads, steamers, packets, race against time and beat it hollow. . .Oh, for the good old days of heavy post coaches and speed at the rate of six miles an hour.”

So busy were the brokers on Wall Street at the height of the Civil War that the lunch counter was invented to offer them a quicker meal than they could manage traveling home.  “Fast food is, perhaps, not the least of the country’s legacies from the Civil War.”

In 1890 the Census Bureau declared that the frontier, a feature of American life since 1607, had ceased to exist.  (not to add insult to injury) had predicted it would take a thousand years for Americans to reach the Pacific.  Had his vision of the simple farmer held, he might have been right. 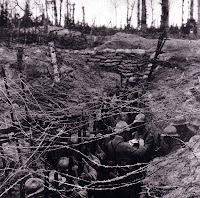 It made the Big Mac with fries possible.  And speaking of food, it changed thousands of acres of hay and oats to crops for human consumption when it brought to an end the 5,000-year reign of the horse as the prime mover of humankind.