My great-grandfather’s family raised chickens, and whenever they had the hankering for a roast chicken, poor old great-grandmother Charlotte would be off to the coop to do the slaughtering and plucking.

Needless to say, when arrived home from her travels she was greeted by some kind of brand new, automatic chicken-plucker.

“Over and over again farm women complained that they put up with antiquated equipment while their husbands enjoyed the latest in agricultural machinery,” Keinegger wrote.  Here are some of her other interesting observations: 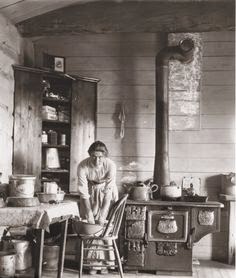 The “best letter” to the Farm Journal women’s section in 1948 was from a farm woman who noted that the chickens and turkeys had running water but her kitchen sink did not.

In 1917 Susan Keating Glaspell wrote a short story called “A Jury of Her Peers.”  In it, a farmer is strangled and the men search the barn and yard for clues while the women are left in the kitchen.  It turns out, of course, that the kitchen is where all the clues lie, and the women’s horror quickly turns to sympathy as they realize the farmer’s wife was being worked to death by her husband, and inadequate technology.  The “thought of Minnie Foster trying to bake in that oven” caused them to dispose of the clues pointing to her guilt.

This ratio is reflective of our applicant pool. There just don't seem to be a lot of women founding tech startups. This is not new news to me-- I struggled to find women to interview for Founders at Work. . .

The day my great-grandfather invested in a chicken plucker, he knew he could have done better.  The same is true today: we can do better.
Posted by Eric B. Schultz