From Both Sides Now: A Note on Whack-a-Mole Leadership 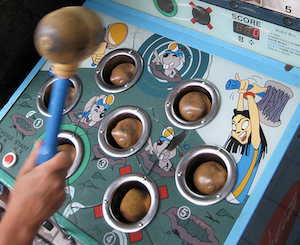 I was fed in the 1980s on a diet heavy in strategy.  It was the heyday of GE’s Reginald Jones, who had introduced something called strategic planning into one of America’s great companies--and would later introduce a successor by the name of Jack Welch.  And just up the coast, the Boston Consulting Group was organizing the world into growth-share matrices.

This was how the world ran, or ought to run.  Leading a business without a strategic plan was like driving blindfolded on the interstate.

In other words, the world I was taught to create--and expect--might represent the smallest share of all global business activity.

In 1965, philosopher Karl Popper suggested that there are two types of problems in the world: clock problems and cloud problems.  A clock problem was structured and predictable, like keeping your car running well.  A cloud problem was unstructured and ambiguous, like forecasting the weather or teaching a kindergarten class.  Since WWI or so--when systematic planning saved the world--it has been the job of modern managers to try to turn the business world into a clock problem.  Strategy was the pendulum, tactics the gears.

There is, however, an entirely different mindset that exists in large swaths of the business world where leaders understand that the economy, competitors and customers are as unpredictable as next month’s snowfall.

The result is an awful lot of business leaders that simply eschew formal strategy.  It’s not that they try and fail at it; it’s that executing to a vision of the world three years out does little to inform their daily activities.

I remember hearing the story of a senior executive who, when asked by one of his Account Managers what his budget goal was for, say, December 1998, would ask: “What did you do in December 1997?”  Whatever they answered, he would say, “Then add 5%.”  He was a tough son-of-a-gun unafraid to cut performers who failed to achieve their 5%.  He was also wildly successful.  His strategic plan was to get up in the morning and do better than he had the morning before.

There is a certain simplicity and effectiveness to that way of working that sometimes makes we want to crumple up my matrix, so to speak. 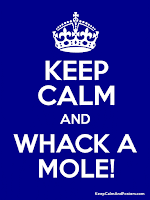 For lack of a better term, I have always referred to this leadership style as Whack-a-Mole.  Leaders in this world have no time to set End States.  They focus short-term on the biggest problem in front of them, and long-term on leaving their business better off at the end of the week than they found it at the beginning.

They whack the tallest mole until it’s back in its hole--and then go after the next mole.  It's Pareto optimal with a ball-peen hammer.

For those of us drilled in formal planning, this can be an uncomfortable way to go about life.  But--I've looked at clouds from both sides now.  From up and down.  And still somehow.  In a world where business resembles a roomful of fidgety four-year-olds more than brake service and an oil change, there’s a certain grounded wisdom in simply trying to be better today than you were yesterday.

And anyway, whacking a mole good and hard can make it all worthwhile.
Posted by Eric B. Schultz