Last year, the Committee on the Theft of American Intellectual Property released a report that estimated annual theft of American IP at about $300 billion, an amount comparable to the current level of U.S. exports to Asia.  This unintended foreign subsidy was termed the "greatest transfer of wealth in history."

While it's perhaps only small comfort, history suggests that Americans themselves are some of the best in the world at corporate espionage and theft, and have been since the American Revolution.  (Wouldn't it be interesting to net out the purloined IP we gather in each year, just to see what our "balance of theft" looks like?)  Among the very first beneficiaries of stolen technology, and still one of the most important in American history, was the Slater Mill in Pawtucket, Rhode Island.

Slater Mill is a kind of "ground zero" for the American edition of the Industrial Revolution, the first place where English factory technology--the latest system for mechanized textile production--was firmly planted in the New World.  Financed by William Almy and his father-in-law, Moses Brown--and just up the road a piece from the Brown family's namesake university--Slater Mill was the first successful cotton factory in the United States.


At the close of the Revolutionary War, Americans found themselves having shifted from being the strongest colony of the most powerful nation on Earth to becoming a pitifully weak competitor to their former mother country.  Among other commercial blows, Americans discovered that the British could manufacture and ship cotton clothing to North America more cheaply than Americans could manufacture it for themselves.

Enter Samuel Slater, a British lad apprenticed to Jedediah Strutt, one of the largest textile manufacturers in England.  By the time Slater had completed his apprenticeship at age 21, he was Strutt's mill overseer and well versed in both its machinery and labor practices.

That's when opportunity knocked.  American states were offering bounties for the introduction of cotton textile machinery.  Slater, who passed himself off as a farmer to sneak past British authorities, landed in New York City in 1789 intending to make his fortune.  An invitation from Moses Brown--who had worked unsuccessfully for two years to bring mechanized cotton production on line--brought Slater to Pawtucket.  Slater reviewed Brown's machines and promptly abandoned them, preferring to start from scratch.

One especially important partner to Slater was David Wilkinson, a blacksmith from Smithfield, Rhode Island, who moved to Pawtucket in the early 1780s.  Wilkinson eventually built a mill next to Slater's, producing equipment for dozens of new factories.

Wilkinson was one of the many ingenious Americans who, but for a break or two, would have achieved lasting fame.  He launched a steamboat on the Pawtucket River some 15 years before Robert Fulton's, built some of the America's first power looms, and invented a screw-cutting lathe that became an industry standard.

The genealogy of the cotton revolution in the North Atlantic goes something like this: John Kay introduced the flying shuttle in 1733, doubling the productivity of weavers.  In 1764, James Hargreaves's spinning jenny enabled a single worker to manage eight of more spools of yarn at once.  Five years later, Richard Arkwright introduced the water frame--an automatic, continuous spinning frame that forever shifted textile manufacture from the home to factory--and it was these machines that Slater learned to operate in England and established in Pawtucket.

As Americans went about fighting their Revolution, England's Samuel Crompton combined the best features of the spinning jenny and water frame into his "spinning mule" which allowed for a dramatic leap in the volume and quality of fine, uniform thread.  Paired with James Watt's revolutionary steam engine, launched the same year as the Declaration of Independence, this cascade of innovation created an industrial juggernaut with a ravenous appetite for cotton.  Not long after, Eli Whitney built his cotton gin, allowing southern Americans to harvest as much short-staple cotton as they had land (and, unfortunately, slaves) to work.

The most important machines for producing cotton in the early 18th century were the carding machine and spinning frame. 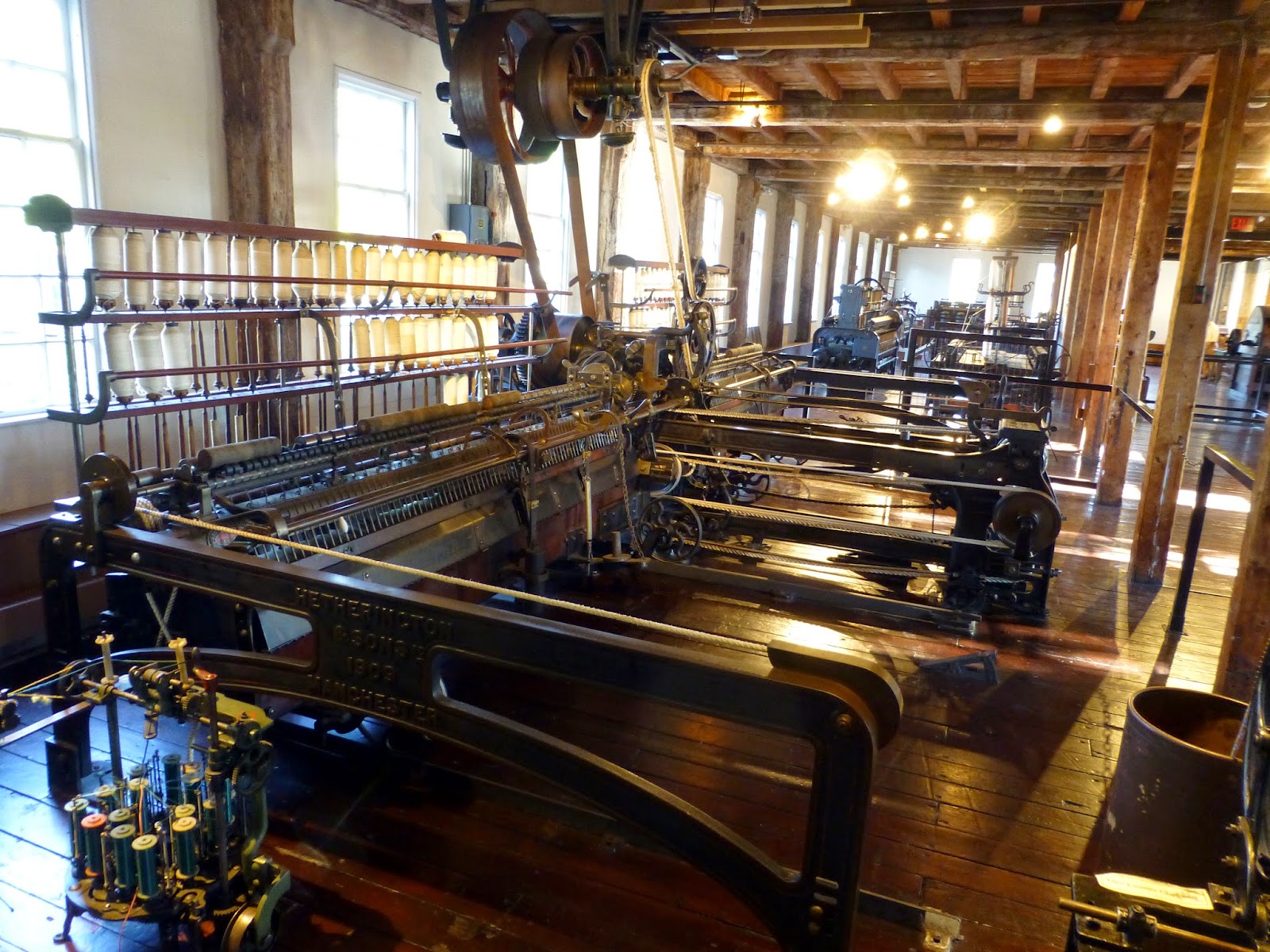 When I headed outside Slater Mill, steeped in 19th-century technology, I found a drone and operator taking a video of the site--old Revolution meeting new Revolution. 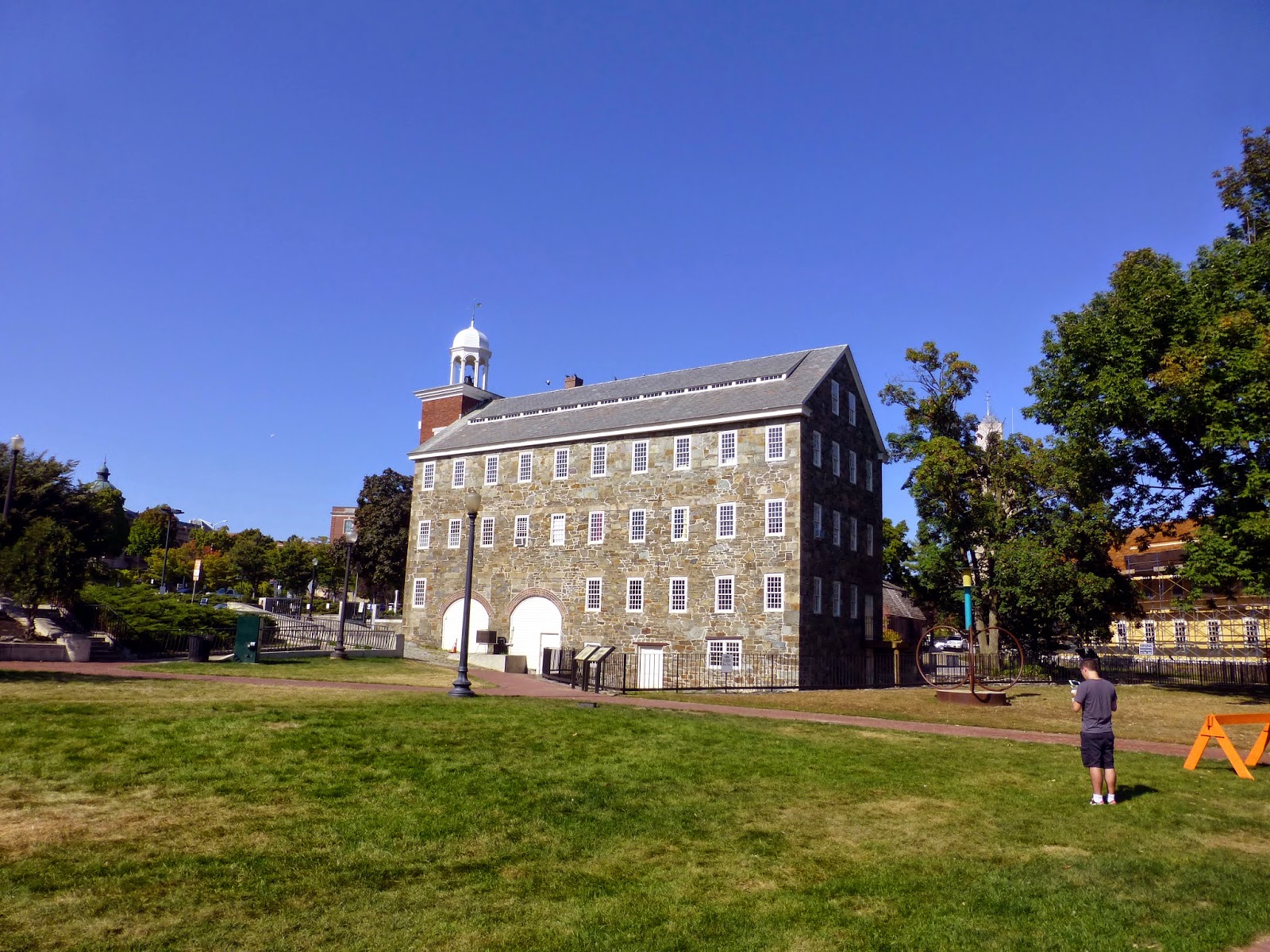 Slater Mill--an important stop in my tour of local Industrial Revolution sites, and probably the most dramatic transfer of technology through personal immigration in America's Industrial Revolution.  It was all part of a huge migration of talent and intellectual capital from Europe to America; between 1824 and 1831 alone, a reported 153 textile machine makers immigrated to the United States.  There were undoubtedly many more unreported.  (Note to Federal Government: Intellectual capital can be enhanced with open borders.)

We're lucky to still have Slater Mill, almost lost to two fires in 1912, but finally opened as a museum in 1955. 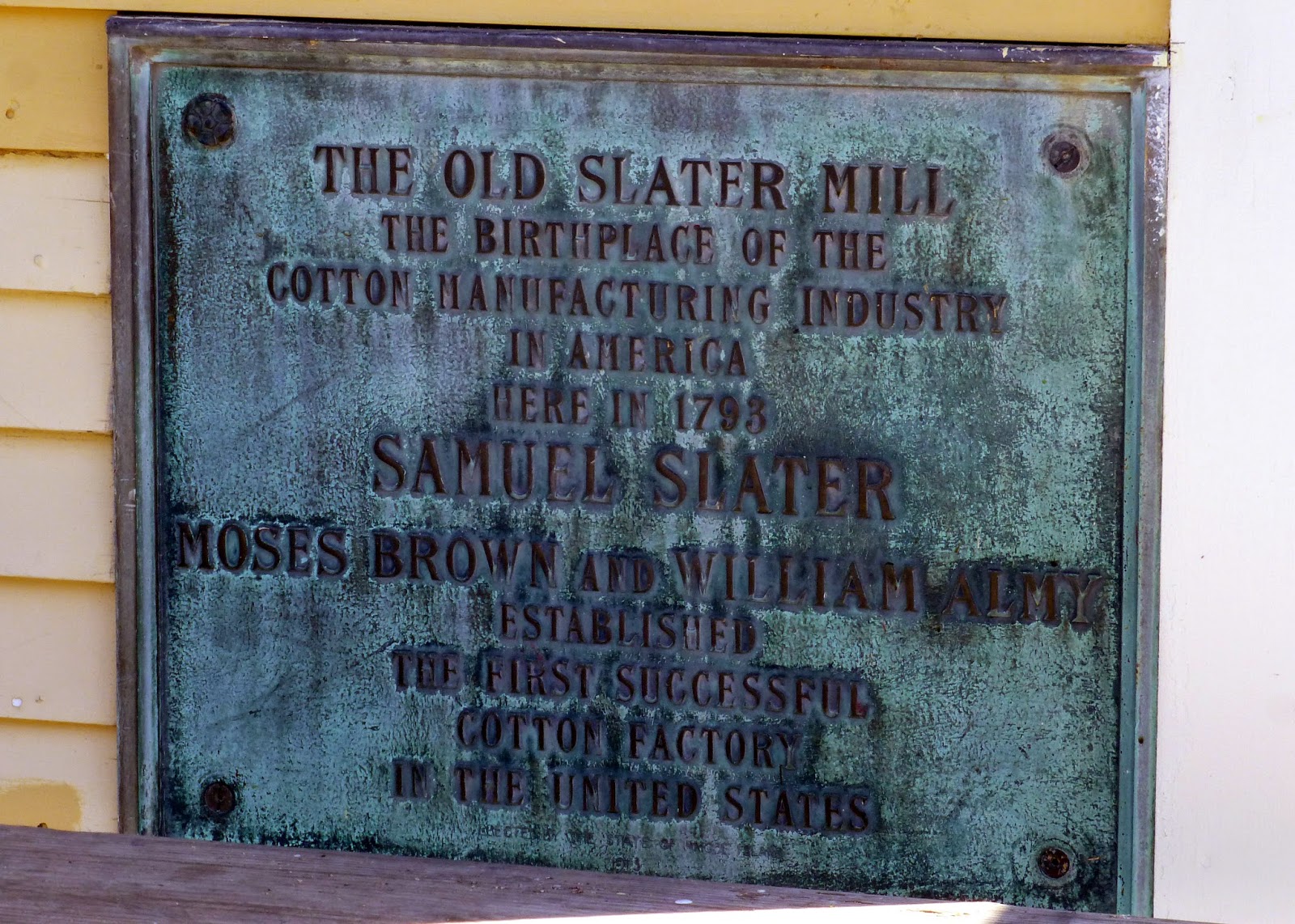 For those of you who have read through to the bottom, here's an interesting postscript:  Every week for almost 20 years I have made my way to Sensitech in Beverly, Massachusetts, often passing by this memorial: