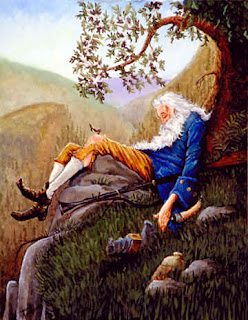 I'm always fascinated by how people--business and otherwise--perceive the passage of time.
We are convinced, and tell ourselves often, that life is moving faster now than ever before.
I’ve written several times about this issue, in Shift Happens, and again in Are We All Just Being Cry Babies?
Me,  I’ve settled at a kind of mixed conclusion: On an absolute basis it isn't hard to argue that life is faster than ever. (See here for a recent & quick digression on the subject.)  But we also reside in a huge, robust ecosystem of information and analytics and forecasting that, on a relative basis, leads to a kind of cultural anticipation that may make our world, if anything, appear slower than that of our grandparents.
You might recall we’ve examined this question of pace with Rip Van Winkle, Lafayette, Daniel Webster, Henry Adams, Alvin Toffler and even an essay from Time magazine in 1973 on the perceptions of returning Vietnam War veterans.  It’s good remembering that Rip Van Winkle is, itself, adapted from a much older German fairytale.  Historian Joyce Appleby’s conclusion, after closely studying the American generation born around 1780, is worth restating:


Since the invention of the printing press and voyages of exploration, European society has moved through a succession of irreversible developments that have given each generation the strong feeling that theirs has been the great period of change, or even the principal divide between the traditional and modern.  The sense of transformative change is no doubt real, but the repetition of such experiences warns us off the notion that there has been one singular period in the long, arduous, and fateful move away from the world of custom.

This week I discovered another perspective, and one especially relevant because it speaks to our own times. 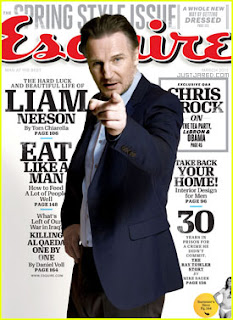 The March 2011 issue of Esquire tells the story of Ray Towler, a Cleveland man wrongly convicted of rape in 1980.  Exonerated and released on May 5, 2010, Towler spent twenty-eight years and 8 months incarcerated and largely outside the streaming flow of technology and culture that has shaped our modern world.
It’s an anguishing story, but it’s also a reboot of Rip Van Winkle, with author Mike Sager doing a terrific job capturing Towler’s re-entry into modern Cleveland last year.
I would encourage you before reading this, and if you are old enough, to think back on life in 1980 and how it has changed in the last 30 years.  Web, iPhone, Google, no more Fleetwood Mac--yes.  But much more.
Here’s some of what Towler saw and felt:
1. A huge increase in visual color and complexity, as simple as: “Fancy new street signs and crosswalks.”
2. Vast connectedness: “GPS, but he doesn’t know how to use it.  BlackBerry; ‘he’s pretty good with that.’”
3. A surge in diversity:  “The number of nonwhite faces everywhere.”  (Towler is black.)  “When he gets his job in the mail room at a big health-insurance company downtown, he is pleasantly shocked.  There are coworkers of every hue; it almost feels like race doesn’t exist in the same way anymore.”
4. A balancing of gender: “That’s another thing: women.  It’s tripping him out the way they are so aggressive today.  Before, they would just kind of wait around, and you would make your move, and they would make it known what their answer was.  Now they come straight up to him and it’s like, ‘I think we should date, Raymond.’”
5. A rise in visible customer service: “While he’s eating at a chain steakhouse on the outskirts of a mall parking lot, a guy in a suit comes to the table and asks how dinner is going.  Ray wonders politely who he is to be asking. . .and is flattered to learn he is the manager of the entire place!” 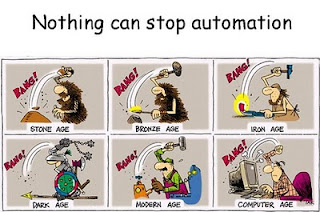 6. Automation (& the need for education!): “Wherever he goes, everything is computerized.  The gas station, the convenience store, the hardware store: Swipe this, enter that code, do it yourself.  Automated supermarket checkout?  You wonder why people are crying about needing jobs.  It used to be anybody could get a job in a grocery store.”
7. So many choices: “Which car insurance.  Which cereal.  Which deodorant, toothpaste, toothbrush, soap, shampoo.  Rows and rows of products. Varieties, sizes, colors.  Which is cheaper. Which is better?  What’s the best buy?  Which gum to chew?  When he went into prison there were, like, two kinds of chewing gum.  Now there are a zillion.”  (Maybe too many: see here.)
Technology, yes...but: Choice.  Diversity.  Gender balance.  Complexity. Automation. Service. Connectedness.
More flavors of gum than you can chew in a lifetime.
A fascinating story, and one--like Rip Van Winkle--that's rapid and sometimes jarring, but doesn't sound too bad in the telling after all.
Posted by Eric B. Schultz