As I recuperate from recent surgery, still too green around the gills to research and write an entirely new blog post, I'm re-upping this post from August 2016. I will never again take the luxury of feeling good for granted.
I'm also thinking today of long-haul COVID survivors, hoping we can find a way to heal them.
(August 2016) A few weeks ago I took an Amtrak round-trip to New York City.  I enjoy riding the train, which gives me four undisturbed hours each way to work.  On this particular day, however, I was feeling just a wee bit green, like that time I should have gotten off the sailboat 15 minutes earlier than I did.

I knew I was in trouble when I opened my iPad and tried to read.  A little rumbly.  A little hazy.  A little green.  I closed the cover, and my eyes, and thought happy thoughts.

Maybe it was too much sun the day before, or maybe something I ate. Maybe it was simply the human condition.  Whatever the case, I was just slightly off my game that day—not too sick to cancel the trip, but not quite well enough to be comfortable and productive.

There exists in our modern world the presumption--or maybe better--the luxury of feeling good. Some combination of healthy food, enough sleep, exercise, aspirin, and access to real medical care when required have been foundational to my decades in the workforce.  Yours too, undoubtedly.  I know there are unfortunate people who suffer without relief, but most of my co-workers through the years have been able to function comfortably on a daily basis thanks to the many blessings of modern life, from coffee to cold packs to dentists to Tylenol, that keep us upright and productive.

What makes the luxury of feeling good so special is that we are among the very first generations of humankind to expect each day to be pain-free and generally comfortable.

Expecting to Die on Your First Job 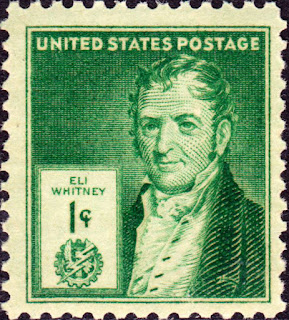 Compare this to someone like Eli Whitney, born in 1765 and among the most famous American serial entrepreneurs of the nineteenth century.  Whitney entered Yale with forty-two other freshmen and graduated four years later with only thirty-eight living classmates; if my undergrad class had suffered death at the same rate, we would have lost 133 students of 1,400.
On a break between school terms, Eli himself nearly died of an unspecified disease, what his sister called “Hypo.”  A few years later he was struck down with malaria, the effects of which incapacitated him periodically throughout his life.  Then, barely recovered, he headed to New Haven, Connecticut, to commence manufacturing and found the town awash in scarlet and yellow fevers so virulent that he could not employ a steady workforce.

Scarlet and yellow fevers, consumption (tuberculosis), typhoid, diphtheria, and rheumatic fevers were common ailments throughout the early American republic.  Tuberculosis was the single most deadly disease before the Civil War, but yellow fever (which killed half its victims) and cholera struck with alarming regularity as well.  Malaria (called “the ague”) rarely traveled north of the Mason-Dixon Line but caused great hardship in the South, especially (as Whitney’s experience showed) because it rarely killed but almost always revisited its victims throughout their lives.  “To have the ague is in some places so common,” claimed an observer in 1832, “that the patient can hardly claim the privilege of sickness.”

Medical science was helpless, and in many cases only added to patients’ misery.  Bloodletting, Phrenology (a pseudoscience concerned with measurements of the human skull), Thomsonianism (that assumed the body was made up of earth, air, fire, and water), and all forms of folk remedies visited their destruction upon Americans.   Oliver Wendell Holmes the elder observed in 1843, that if the entire material medica could be thrown into the sea, it would be “all the better for mankind, and all the worse for the fishes.”

Entrepreneurs today talk about how fast the world is turning and how hard it is to grow a business.  But most of them have a reasonable belief that not only will they be alive tomorrow to go into the office, but that they’ll be feeling pretty good when they do.  When Whitney took his first job out of Yale—a coldblooded New Englander headed for a steamy plantation in South Carolina--he wrote his brother to say he fully expected to die--and he was not being dramatic.

I believe that most everyone in nineteenth-century America fell somewhere on the green spectrum on a pretty regular basis, and they either learned how to deal or, if our numbers are right, drank and drugged their way to dull comfort.

How many cumulative years of his sixty was Whitney downed by sickness or sidelined due to lack of healthy employees?  Two? Five? It makes his success all the more spectacular.  (And his final act of self-administered medical care was itself a wonder—see Not For the Squeamish.) 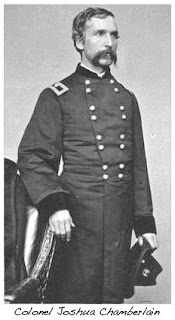 Move the calendar ahead just a bit and we find Joshua Lawrence Chamberlain commanding Union troops at the Second Battle of Petersburg in June 1864.  Chamberlain was shot through the right hip and groin, a wound so serious he was given a deathbed promotion and recorded as deceased in Maine newspapers.  Easing past the grim reaper, by early 1865 he was back on the battlefield, this time wounded in the chest and arm, a limb barely saved from amputation.  In all, “Bloody Chamberlain” had six horses shot out from under him and was wounded six times during the Civil War.

With peace, he served four terms as the Governor of Maine and went on to become president of Bowdoin College.  Chamberlain practiced law in New York City.  He pursued real estate interests in Florida and railroad interests on the West Coast. At age 70 he volunteered for duty in the Spanish-American War but was rejected.  He died at age 85 due to complications from the wound suffered at Petersburg.

Joshua Chamberlain had a full, rich, active, successful career.  Nothing seemed to slow him down.  But we also know that from the moment of his Petersburg wound in 1864, he was forced to use some kind of primitive catheter and colostomy bag.  He underwent six operations to try to correct his wound.  He suffered pains, fevers, and infections throughout most of his life.

One of my friends at Gettysburg said, “I think Chamberlain had a urinary tract infection for the last fifty years of his life.”

Have you ever had a urinary tract infection for a day?  Did it make you want to run for governor?

And then take the case of fellow-Mainer, merchant Zadoc Long.  According to historian Jack Larkin (The Reshaping of Everyday Life), Long suffered all of his adult life from a chronic infection that produced recurring abscesses on his legs and chest and periodic bouts of excruciating pain.  Yet, summing up his time on earth, Long concluded that he had enjoyed “generally good health.”

Where today we might begin a friendly letter by writing, “We are all well,” Larkin says that letters in nineteenth-century America often began with the greeting, “We are all as well as common.”  It was another way of saying, “Except for a list of painful ailments that include dislocations, poorly-set fractures, chronic infections and inflammations, and a dozen other normal, debilitating afflictions, we are all well.”

When we think about Whitney, Chamberlain, Long, and thousands of other energetic, successful men and women--and let’s not get started on the miseries of childbirth--who came before us, we forget how different the very act of living was for them.  It wasn’t until World War I that Americans, for the first time, could count on dying older than the generation before them. And, the New York Times reported recently, it's just been getting better: major diseases like colon cancer, dementia, and heart disease are waning in wealthy countries.  "The leading killers--cancer heart disease, stroke--are occurring later in life, and people, in general, are living longer in good health." 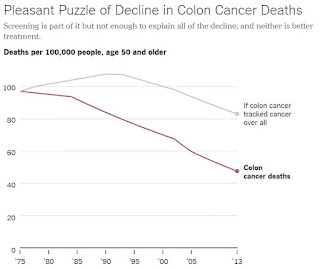 This means that the last few generations in America have been blessed with an enormous advantage.  It's not just that many of us get up in the morning and “pursue our passion” instead of having to plow the fields or milk the cows.  It's not simply that we can get warm in the winter and stay cool and productive in the summer, or that we have clean water to drink and indoor plumbing.

Perhaps our greatest single advantage over prior generations is the ability to work and live comfortably and pain-free. The luxury of feeling good. Ralph Waldo Emerson, who spoke often to nineteenth-century lyceum audiences about the subject of health, believed that the first wealth was physical well-being, an ability to "whirl with the whirling world."  Only Americans with "seething brains, heads full of steam-hammer, pulley, crane, and toothed wheel," Emerson said, could ever hope to accomplish anything of consequence.  Personal and national success depended on good health.

Exchange a pulley for an algorithm and we are just as dependent on good health 150 years later.  Unlike our ancestors, however, many of us are lucky enough to feel good most of the time. Which puts our own successes in perspective, and provides an even greater appreciation for those that came before us.
Posted by Eric B. Schultz